After spending several days in Camera Raw editing a whole photo shoot's worth of images that created those sidecar .xmp files, I then used Bridge (CS3 2.1.1.9) to do a batch rename of the original raw files.

Stupidly, I used periods in the text batch rename (e.g. "IMG_3876.CR2" became something like "12.S.L-SteriosYTT#001.CR2"). I learned you can't do that apparently, as then Finder and Photoshop couldn't recognize my renamed files. Bridge showed the metadata file type got confused by the periods I used in my rename.

OK so I renamed them back to .CR2, now I have 2 problems though! One is the metadata still shows document type incorrectly (however the previews in bridge are now loading). See picture below for example of the incorrect metadata 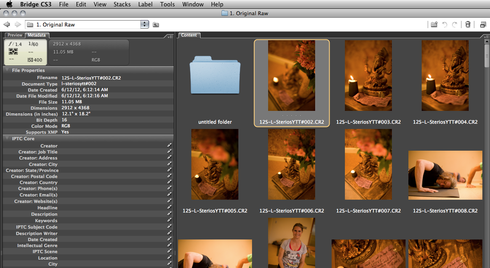 Next - waaaay bigger problem... now none of the previous .xmp sidecar files correspond to the renamed (period or no) raw files! So all my days of editing in Camera Raw are "lost"! Help! How to I reassociate the .xmp to their .CR2's? See this image for my issue (show in the Finder window): 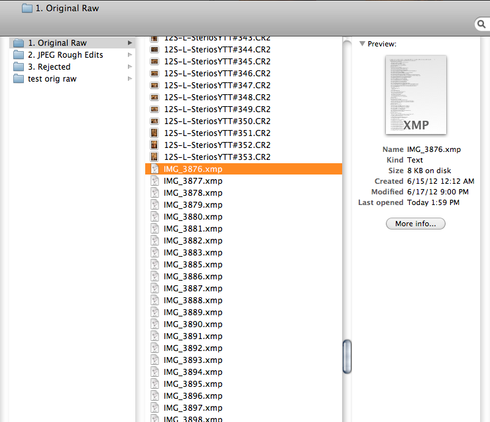 And, unfortunately, I can't just batch rename the .xmp's even if that works, as I only have edits for about 204 out of 353 images and I'm not sure which go to which even if I could rename them all by hand to reassociate them!

Bridge should have renamed all your XMP files, too. Maybe CS3 is too old to work on your computer...a reason to keep things up-to-date.

An idea that comes to mind, which I can't test because I don't have a Mac nor have Bridge for CS3, anymore, but maybe it would work if you do things carefully:

I think what I would do is create extra XMP files to fill in the gaps that you have in your image sequence, now, so there are 353, then using Bridge or another program that is capable of doing a mass rename, rename all those XMPs so that they match the CR2s, and then delete the XMPs that are the placeholders after the rename is complete.

To know which ones to delete, you'd need to devise a way to keep track. You might just keep a printout of all the names and carefully delete the ones that aren't there on your printout, now, but maybe if you created a very small or completely empty file to use as the master to copy each placeholder XMP into each of the gaps of the XMP sequence, then it would be easy to see which ones are real and which ones were the placeholders, by sorting the folder of XMP files by filesize and deleting all the tiny or zero-sized ones.

Before I attempted any of this hacking, I'd want to make a copy of all the CR2s and XMPs the way they are so I could put things back if things went haywire. I'd also want to do my renames of the XMPs in a folder that didn't have any other files like any CR2s so nothing would try to hook them up too soon and mask which ones were real.

There are probably smarter Mac people who could right a script to parse the existing XMP names, and do some math on the number in the XMP name and create the corresponding number in the new naming sequence and rename the files that way, but I am not expert at that level to just give you such a script and have it work.

Hi Steve. Not sure how to create extra XMP files? Also I wouldn't know which gaps to have them fill in... unless I'm not understanding what you were saying?

Appreciate your help though!

What is the last XMP filename?

I ask this because the method I described requires that there were no photos deleted from the original sequence of shots, either in the camera or afterwards. Subtracting the sequence number of the first XMP file from the last XMP file abd adding one will tell us how many photos there were. If this number is 353 then all is good. If not, then it wouldn't work.

It may be possible to match up the XMPs with the CR2s using the Taken-Date metadata that presumably resides in each file. This would be much more timeconsuming than having a rename work, but it may not be more time-consuming that redoing all your edits on all the files.

ah. Unfortunately many were. What I ended up having to do was sort of what you said, match up the xmp time stamp with the image metadata time stamp. This took many hours but at least I've learned from my mistake!

If you had "Preserve current filename in XMP Metadata" ticked when you batch renamed; you should be able to batch rename the CR2 files back to the original filenames, that will then associate the xmp files with the correct CR2 files.

Had I only known about that. I will never not check it again! I've done a couple test batches since with it checked, and yes that seems to work to cover my butt, so to speak, should I ever do something like that again.

So I guess my issue has been solved - the hard way. The solution really however is to never do it that way ever again. I wish preserving filenames were checked as a default!

Thanks for all your help guys.

I've searched in every "XMP" related file I can find here but get no relief.

I am like about 100 percent of Adobe customers and did something that
doesn't appear in the non-existent user manuals Adobe doesn't provide.

I deleted some XMP files. AI know, that was really stupid but where does
it say within easy reach of an Adobe user since CS2 and now CC? Can't
see it. Result in my situation -- and perhaps it because of something else
stupid that I did. Could be. And that might indicate another question should
be posed:

"Why won't my Bridge CC open?"

Something is wrong and I am led to beleve it is the wrongful deletion
of some XMP files which were following my 8,000 D3x images around
on my various external hard drives attached to my iMac 27" with lots
of memory. Any guesses? beger@hawaii.rr.com