I've struggled with the built in DNG conversion when using Bridge Photo Downloader for the last four months. Ever since I bought my Sony A7r IV - I've kept Photoshop, Bridge and Adobe DNG Converter up-to-date without any success of using this feature. I've tried this on two of my PCs - both running the latest Windows 10 updates, drivers, firmwares and so on. I've also tried installing the "Sony A7r IV Drivers" for thumbnail preview in windows. That didn't help either. I am a bridge fan - not interested in using Lightroom for my image selection and process. So using the Adobe DNG Converter is a bit of a hassle, and the built in conversion is such a good feature to use. I have no problems when using my Hasselblad CFV, Sony RX100 or Nikon D3x raw files and the built in DNG Conversion with Photo Downloader. If anyone has any advice regarding this - or what I could try, I'd be more then happy to give it a go! This is what I've tried so far: This is what I'm currently running as of 4th of April 2020: 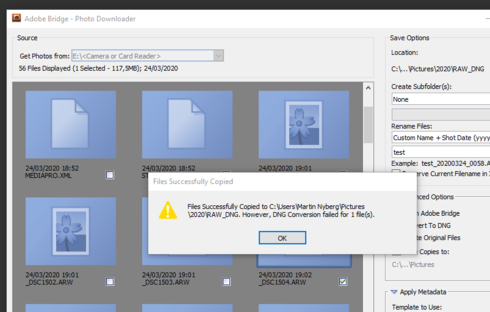