[See here for how to reproduce the bug and an easy workaround:

Editing a picture in Photoshop 2021 from within LR 10.0 makes the color profile disappear and the image loses all it's vibrancy... Any idea how to fix that? Top image is what I see in LR. Bottom is how it shows up in Photoshop...

this version fix it?

@cyfoto I just installed and tried it and the problem is still there.  I think the issue is in Adobe Camera Raw, so I am hoping that the next update of that component will resolve?

Apparently, when you edit a raw with a LUT creative profile in PS, and there is no .xmp sidecar, the LUT is getting dropped on the floor.  Perhaps this is a bug in the hidden mechanism by which LR passes develop settings to PS when there isn't a sidecar.

The example DNG posted by @dprosk involves a creative profile with a LUT. Here's what the relevant internal LR develop settings look like:

Thinking a little more about this, almost certainly the LUT is getting dropped on the floor unless there's a .xmp sidecar.

But internally, LR's develop settings just contain a reference to the LUT, which is cached in the Camera Raw engine:

So no issues using DNG?

I can't replicate the problem with DNGs. DNGs contain their develop settings in an XMP metadata section in the file (just like TIFFs and JPEGs), the same XMP contents as would be in a sidecar. I confirmed with @dprosk's DNG that it contains the actual LUT, not a reference, just like a .xmp sidecar.

Exactly and probably why I can't replicate since I'm just working with DNGs. So in the meantime, converting to DNG could be the fix.

That said, the issue in ACR should still be fixed so that "Edit in PhotoShop 2021" works as expected and as it used to.  My preferred workaround until the issue is resolved is the save metadata just prior to editing in PhotoShop.  But hopefully I won't have to use it for long!

Thanks @John_R_Ellis for the thorough analysis!

I am having the same problem.
I am using custom profiles, which I have created and using for the last 2-3 years.
After finishing globla editing on lightroom I am pressing CTRL+E to edit the photo on photoshop, but unfortunately the profile is disappearing.
I tried checking "Automatically Write Changes Into XMP" without success.
Below you can find my sytem info on both lightroom anf photoshop

Also, let us know if any of these additional workarounds help:

Custom and 3rd party Profiles now carry over if you use the Edit in Photoshop option from Lightroom Classic.

Interesting. This error is not listed as solved, and when I quickly tried it yesterday I found it was not solved. That was on a Mac, however.

@koketso, perhaps you could upload one of your custom profiles to Dropbox or similar and post the sharing link here? We can see if the issue happens on other installations with your profile.

Update on my working solution:

This seems to now work in conjunction with XMP sidecar files on.

It previously didn't even with XMP files on - and I can confirm the XMP was being written but Photoshop was not reading it or not reading it correctly. Again, only happened with .CR3 files.

Here is a profile for testing: https://mega.nz/file/GdpiiBpR#d0cPt45T5WjyfUF7DfZkT3th8EoY3J9jUFQDBKu9ZLQ

I see the bug on all types of raw files, not just on .CR3. Saving metadata to file before you send the image to Photoshop does indeed seem to work.

When sending an image to PS for editing 3rd party develop profiles are being ignored.

I've tested this on an Intel based Mac running OSX Mojave and a M1 Mac running Big Sur. The problem is the same so not OS or Architecture related.

When applying a develop profile (Adobe Color, Adobe Landscape, Adobe Vived etc) and then sending the image to PS for editing the profile is ignored unless the profile is one that shipped with LR. ie I can apply any profile from Adobe, Modern, Vintage, B&W and the profile is honoured when sent to PS. If I apply a 3rd party profile from say On1 or 3rd party film emulation profiles of my 3rd party camera profiles then these profiles are ignored.

I suspect that the issue has manifested itself when Adobe changed the way images are sent to PS. Previously a PSD of TIF file would be generated and then that file was sent to PS for editing. Recently a TIF or PSD is not generated and the file format displayed when the image opens in PS is the raw format eg. CR2 or CR3.

I have no idea if this issue persists in Windows machines as I do not have access to one.

Note: This comment was created from a merged conversation originally titled Profile issue when sending image to PS for editing from Lightroom

There is a known issue with LUTs in some presets.

@andrew_rodney If this is the case, it's a pity the support staff don't know about it. I spend 20 minutes on a live chat with some idiot telling me it's the 3rd party developers fault. Then sent me an email about colour spaces.

Adobe customer support has a reputation for saying anything to close a call when they don't know the answer, unfortunately.

I've just discovered this bug too and actually reported in in a separate thread before finding this one. It seems that Adobe are forcing us into a lot of "work-arounds" just lately. It's unacceptable!

after reporting it above and then had Adobe call me. yep, definitely an issue with transfer of 3rd party profiles. The work around mentioned in this forum works. LR takes a while to create the xmp files. Other option is to right click the photo you intent to transfer clicking - metadata- save metadata to file/ update DNG preview.

Support said he would make a note. not sure if anything will happen

When opening an image in Photoshop, from the "edit in Photoshop" command in LR Classic, the image is grossly oversaturated. However, if I first export the image as a PSD file, then open that file in PS, it matches the look in LR. Up to date on both LR and PS. Working on a Mac, with Mojave OS. Have not changed any of my preferences in either program. Problem just appeared today, after a lifetime of always matching. Any suggestions?

Note: This comment was created from a merged conversation originally titled Lightroom Classic: Images opened in Photoshop, directly from "edit in Photoshop" command are way too saturated!

With my limited experience opening images from Lightroom, I get the best results by opening as layers. I just use it for focus stacking and experimenting with Super Resolution but I don't experience your problem. I'm using Windows, not sure that matters and I only send raw images to Photoshop.

Did you apply a custom camera profile to this image? There is a bug in Lightroom/Photoshop that such a profile is not applied when using Edit in Photoshop. Search for it here in the forum; there should be a very long thread including some work around suggestions. I don’t think that bug is fixed yet.

This thread is being merged into an existing authoritative thread for better tracking and response. Please review the official answer (if any) in the second post on the thread for more information.

Aaaaand we're back to where we began - this time even with XMP files saved next to their raw files (Catalog Settings > Metadata > "Include Develop settings...")

"Edit in Photoshop" does not carry over the Profile, even though the profile can be selected from both Lr and ACR.

Note that the setting Catalog Settings > Metadata > Include Develop Settings In Metadata doesn't ensure that a photo's most recent metadata is saved to the file or .xmp sidecar.  It just specifies that whenever metadata is saved, the Develop settings will be included.

To ensure the most recent metadata is saved before editing in PS, do Metadata > Save Metadata To File or set Catalog Settings > Metadata > Automatically Write Changes Into XMP.

I also have this problem. It appears that creative profiles with lookup tables are not applied correctly when using the Edit in Photoshop command. When applying a preset with such a profile in LR, settings such as exposure etc are applied when opening in Photoshop but the actual profile is not. I am using MacOS 11.4, LR Classic v.10.3, Camera Raw v.13.3, PS  v.22.4.2 (i.e. all up to date). However, this did not work before i upgraded to MacOS Big Sur and before I updated to the latest verions of LR and PS. This happens on all creative presets with lookup tables (e.g. RNI All Films 5) and is causing massive problems with workflow. Put simply, the image in PS looks nothing like the image in LR as the creative profile is not being applied when opening in PS.

While waiting for Adobe to fix this, you can work around the bug by selecting the photo in LR and doing Metadata > Save Metadata To File before you edit in PS, or set Catalog Settings > Metadata > Save Changes > Automatically Write Changes Into XMP.

This came up about 1.5 months ago and even with the latest release of LrC the issue still persists.

When you edit a photo in LrC (Mac and Windows) and you apply a custom camera profile via the profile browser, everything looks ok. But as soon as you hand the photo over from LrC to PS, the applied profile is lost.

I get complaints about this bug every single day for the last 1.5 months.

Does anyone know when this is supposed to be fixed? 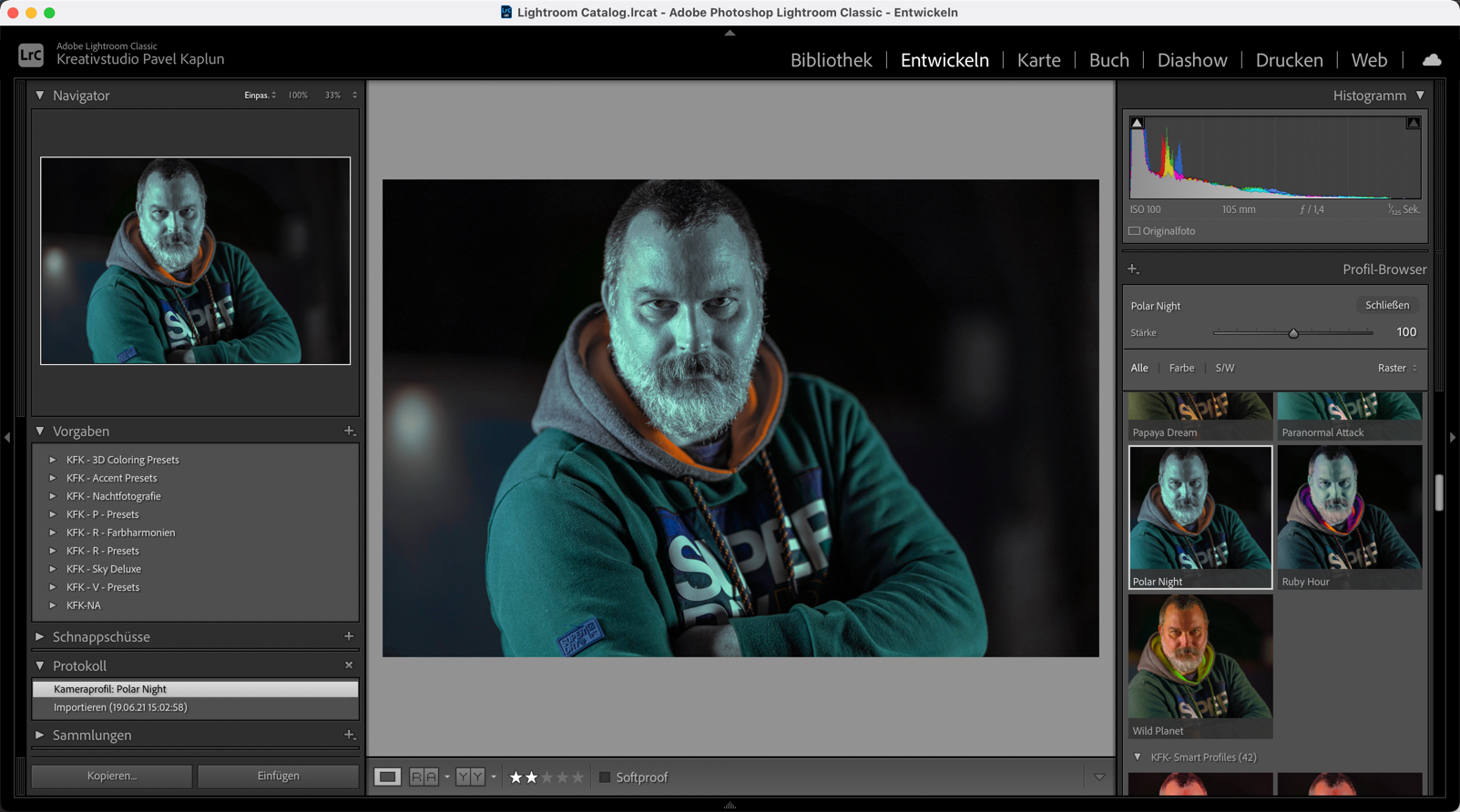 Step 2: Hand over to Photoshop for further editing 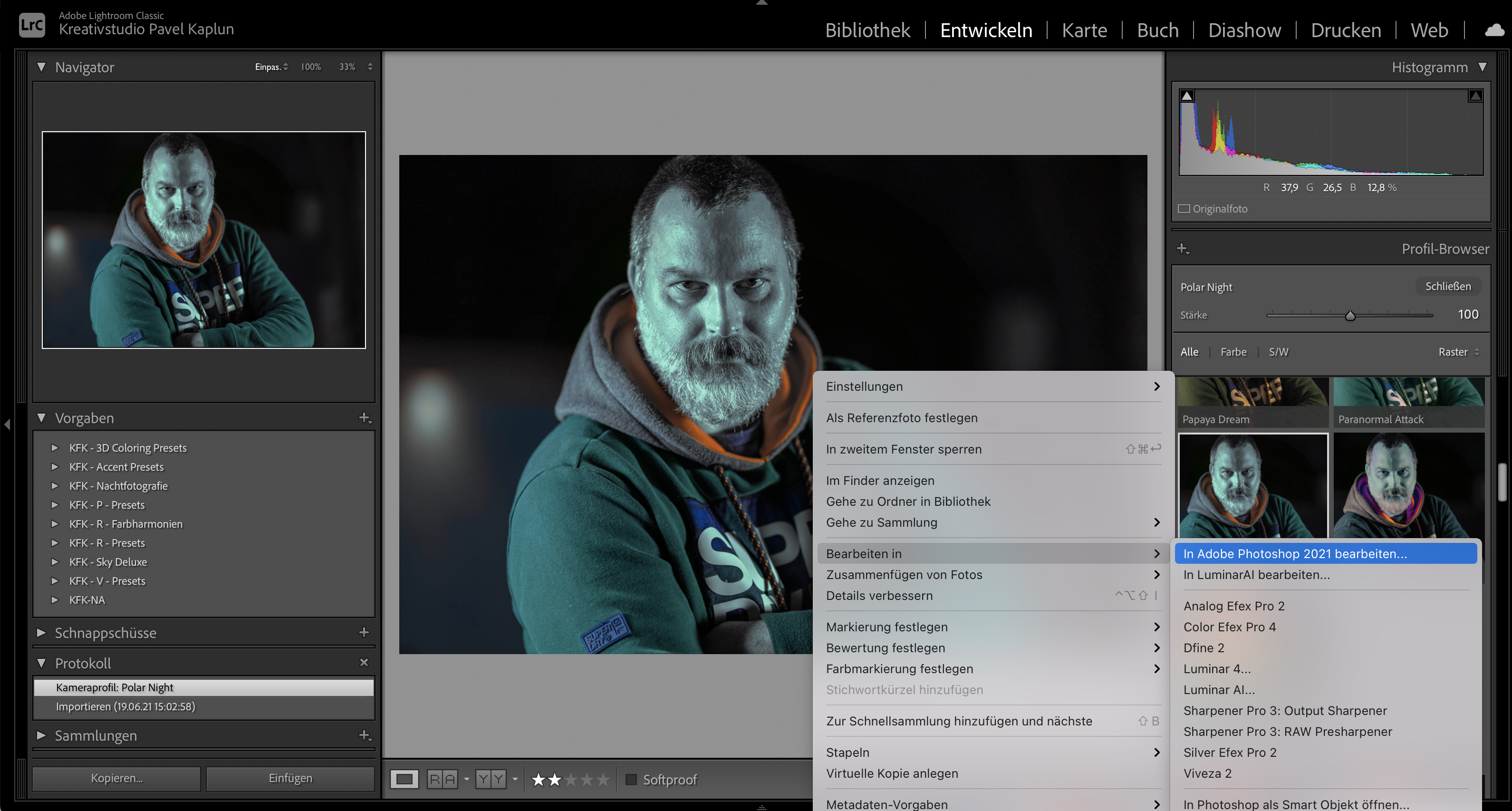 Step 3: This is what you get in Photoshop. The profile is lost. 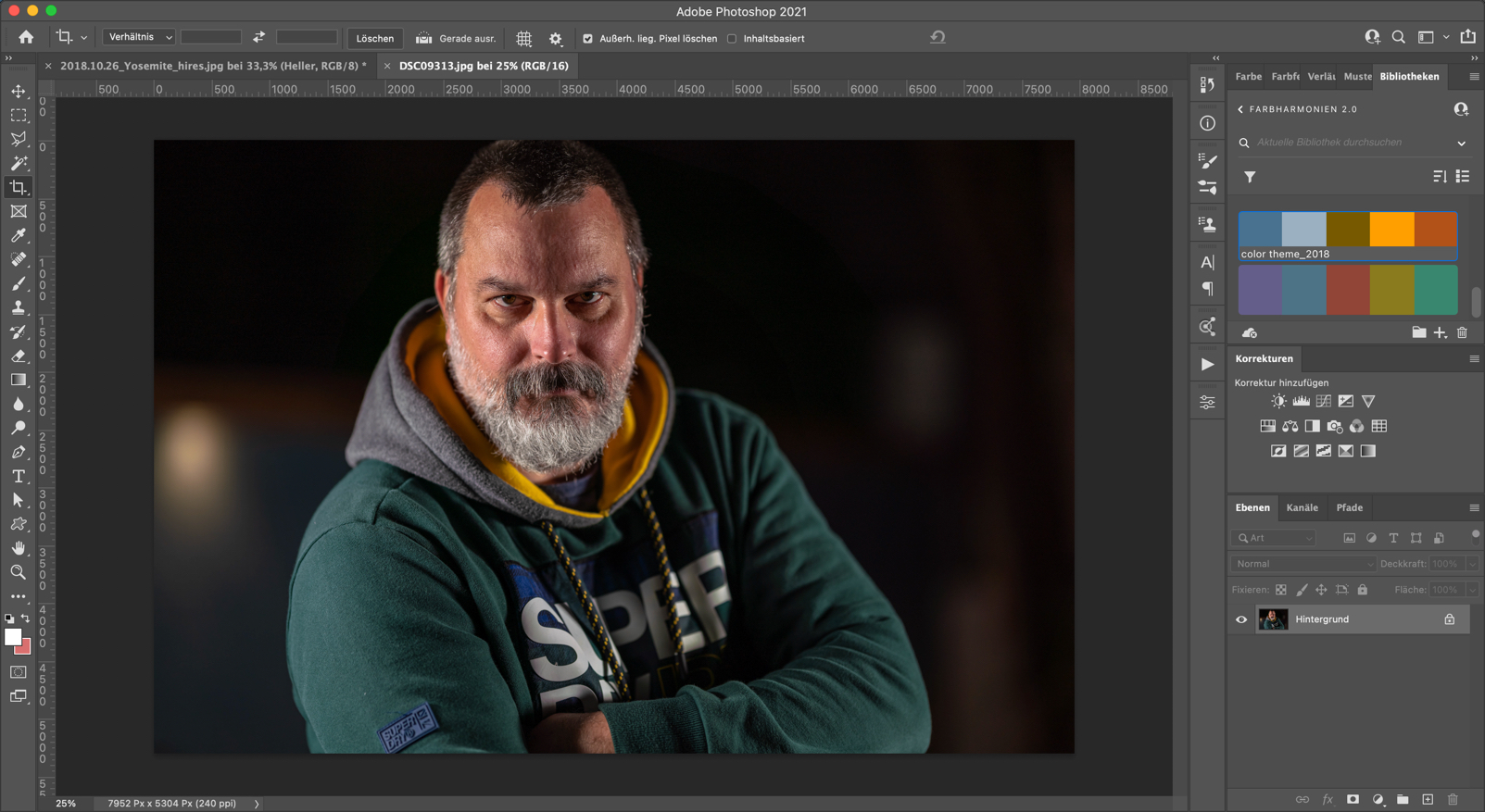 Note: This comment was created from a merged conversation originally titled Lightroom Classic 10.2 Bug: Custom camera profiles are not transferred to Photoshop

This is a known issue. I do not know when this will be fixed, but apparently an easy work around is to use ‘Save Metadata to File’ (Cmd-S) before you send the image to Photoshop.