When choosing Crop tool there is a padlock symbol that shows whether aspect ratio is locked or not. When making the first attempt to crop any particular image the padlock symbol incorrectly shows as unlocked when the tool is behaving as locked.

This only seems to happen on the first attempt to crop a new image.

Whilst the symbol incorrectly shows as unlocked (even though aspect ratio is locked), just passing the mouse pointer over the padlock (no click required)  changes the padlock to correctly show as locked.

Once the initial incorrect view has been corrected (by one of the above methods), all subsequent behaviour on the same image seems correct. Open another new image and the problem reappears.

This problem now seems to be fixed with v10.2. Thank you!

I need to add a lens profile. In LR 6 I went to update and tried to download LR 6.12. A screen asked for my password showing a padlock. No password I have worked. Is this asking for an Adobe or an Apple password?
Note: This comment was created from a merged conversation originally titled Lightroom: Dialog with padlock when trying to update

Can you share a screenshot of the dialog?
Adobe Photography Products

These steps reproduce the problem:

If padlock symbol is shown as unlocked when you open crop tool then click it to lock and move to another photo that has not been cropped. Press R to enter crop mode. Padlock is shown as locked but behaviour is as if aspect ratio is not locked.
Hover (don't click) mouse over padlock symbol to change it from locked to unlocked.

Another possibly linked phenomena is that sometimes, on an old photo, when entering crop tool the padlock symbol is greyed out until you pass the mouse over it.

@martin9251 unfortunately I can't reproduce this either.

It would be interesting to see a screen recording of this in action.  macOS's built-in screenshot utility can take recordings.

Here is a screen recording of the problem. Whilst watching this short clip keep your eye on the padlock symbol (top right in the crop panel) shown as 'locked' throughout until I pass my mouse over it near the end.

A Preference File will survive a Lightroom uninstall/reinstall. Sometimes weird behavior is corrected/cured by resetting the preferences.

2. Hold down [Alt/Opt]+[Shift] while restarting Lightroom.

3. Overwrite the Preferences when prompted by the dialog.

Does the behavior continue after resetting the preferences?

Nice demonstration Martin!  Hope Adobe is able to help you. 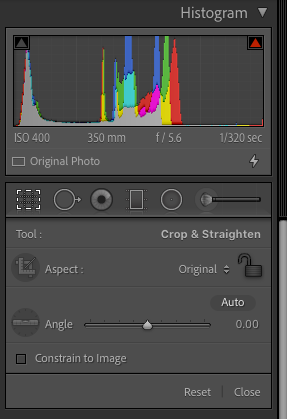 The issue is still there I'm afraid after resetting preferences as you described. I've also captured a related phenomana which (in the image above) shows the padlock greyed out. If you hover (not click) your mouse over the grey padlock it turns to the normal yellow - and usually stays yellow  until LR is next opened.

In the meantime the bug as described above still exists. It really boils down to the image of the padlock showing incorrectly as locked when the tool behaves as unlocked.

Just like the grey/yellow, it's solved by passing the mouse over the icon shows it correctly, but the problem returns on the next image.

After upgrading to version 10.0 in the develop module with the crop tool, the lock icon shows locked indicating that the image will be cropped with the original aspect ratio, however it does not, it is a freeform crop, as soon as I move my mouse pointer over the lock icon (without clicking) the lock shows open.

Note: This comment was created from a merged conversation originally titled LR Classic 10.0

I'm getting the opposite, lock keeps closing forcing me into a crop ratio.  Unlocking the aspect ratio only seems to work for that crop, the lock reverts to closed next time I want to use it.

Let us know if resetting preferences fixes this misbehavior:

LR sometimes soils its preferences file, and resetting it can fix all sorts of wonky things. That article explains how to restore the original preferences if it doesn't help.

I am having this exact issue with LR Classic 10.0 on a 2019 27" iMac. When I open the crop tool the lock icon is open but the crop behaves like it is locked. When I mouse over the lock it closes. If I then unlock it it opens and I can then do a custom - free form crop.

This behave repeats for every image I edit. In the past if you left the crop icon unlocked it would stay unlocked, but note that it looks like its unlocked but is not, at least until I make it show its true state then unlock it.

Very annoying and slows me down massively.

Very disappointed with LR 10 this is the third bug that I have seen so far.

Resetting Preferences as described by Rick solved the issue for me. Thanks Rikk

resetting prefs didn't work for me.

Be aware if you are resetting Preferences that if you have anything in non-standard locations (like I did) LR won’t find them and you will either need to move them or return the pointers to the old location. Nothing is ever straightforward.

Q: just to clarify, when I reset prefs, everything was back to standard (all settings I changed); so I wouldn't have the problem you mentioned, right?

Correct, if you haven’t shifted locations of your presets then you will be fine.

This issue is a nightmare - the crop tool lock is definitely working correctly.  When I lock on one photo and move to second photo the lock on the 1st is not retained, i.e when I go back to the first it is unlocked! For my particular purposes and work flow this makes the tool essentially unusable!!! It needs to be fixed and fast!

Just been working with adjusting aspect ratio for a lot of photos. 10.0 Release.

After a while, the padlock state for original reverses. Original is set, the lock is set. So you expect it to maintain aspect ratio.

It doesn't, you have free reign over changing the crop in both axes.

So the UI state is getting mixed up for some reason.

Update: The issue I described above is not fixed in Classic v10.1 and not fixed when updating the preferences file. Unlike the other bug I reported (which has not been fixed - thanks!) this one has not been acknowledged by Adobe but has by other users below.

If Adobe would like other info to help them fix then don't hesitate to ask me.

I am still unable to reproduce this issue.

Does anyone have reproducible step-by-step instructions I can follow.  Include your OS version.

in my case for example (many visual elements are affected, so this is one example only)

similar for other GUI elements

@Rikk I have watch all the videos, try to reproduce following the same steps but on W10 en LR 10.1 it works. I cannot reproduce the issue

Here is a recipe to create the incorrect display of the crop lock and there is a video link attached.  Lr10.1 and Macos10.15.7

You can do all this from the Develop module

9 Start the crop.  Notice the mode is different from the displayed Lock

10 Just hover over the lock without clicking and it will change to the correct display.

Here is a video showing the behavior.

Were you able to replicate the issue with the above recipe

Tried it just now, I too see the padlock change when I hover the mouse over it.

Originally I said that resetting the Preferences worked. To some extent it did but using Robert's routine above I replicated the error as well. Instead of being locked as the padlock indicated the crop was actually free which is revealed on a mouse over.

Time for Adobe to fix this.

I can confirm that @robert_somrak steps above and the behaviour it produces are identical to that which I raised at the top of this thread. The videos I posted show the same behaviour too.

Note also that sometimes the padlock is grey instead of yellow (see my screenshot posted above about a month ago).

we now have to toggle the A key/crop lock a couple times to get the display and the actual function to match each other!!!? My eyes now have to move an extra 300 times an hour because I have to look at the lock again and again, and I can't trust that display is correct because many times it looks unlocked but is definitely still locked, and I hit undo 100's of times more per day because I have no idea if the crop lock is on or not. How do you not realize you ruined a basic function before unleashing it in an update? Christ

Note: This comment was created from a merged conversation originally titled LR Crop Lock is F*cked 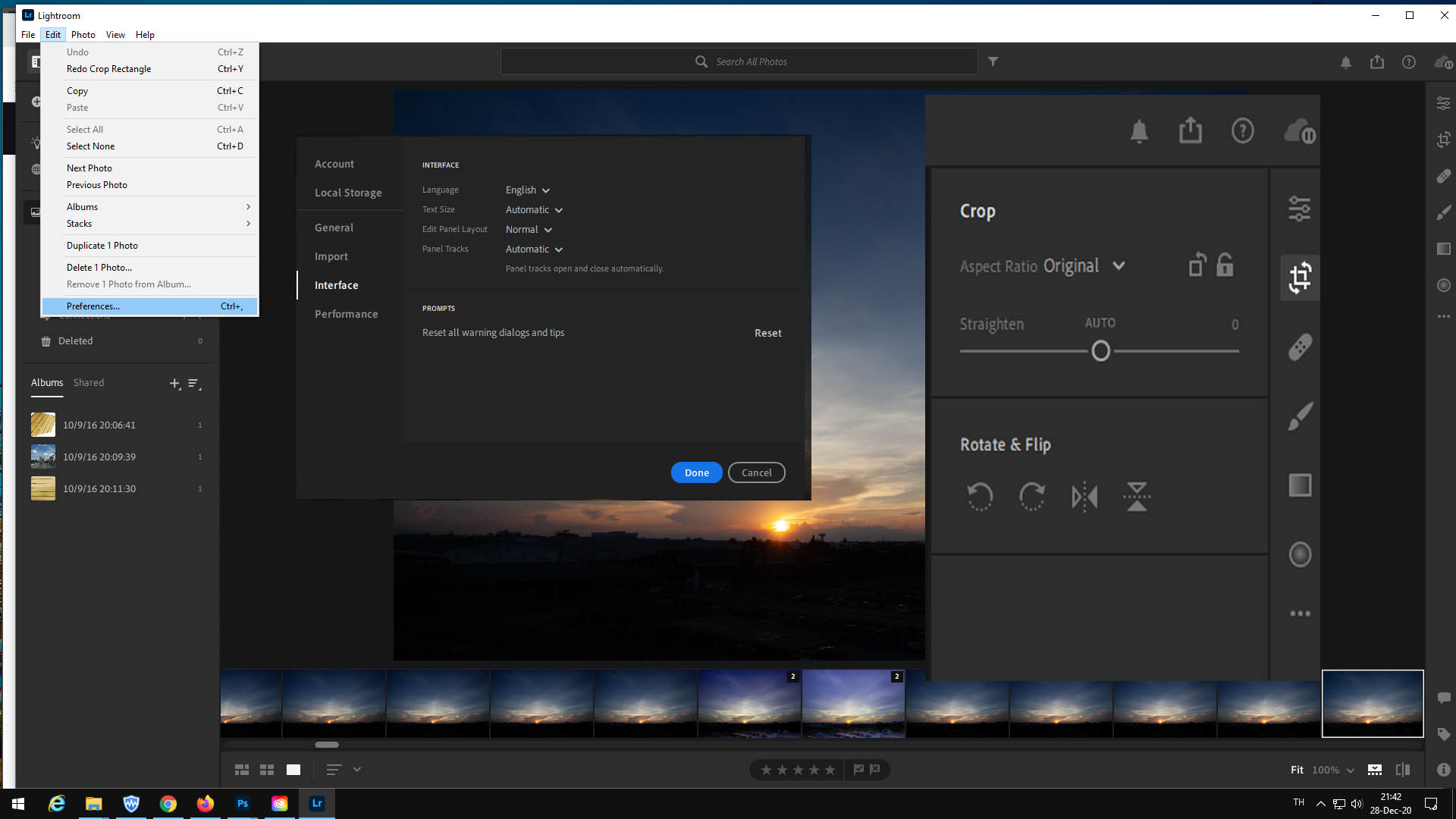 thanks but wrong app homie.

This has been a frustrating issue for years and seems to have gotten worse. Now I find that every new image comes up as locked to Original aspect ratio and I have to manually unlock every image before I can adjust it, which slows me down a lot. Please, Adobe, fix this!

Ascii, I think you're experiencing a different issue. This thread is about the crop padlock icon showing as unlocked when in fact the crop aspect ratio is behaving as locked.

Your issue appears to be different: The padlock icon is correctly reflecting the current state of the aspect ratio, but it's always coming up as locked, even if it was unlocked on the previous crop you just made.

If my understanding is correct, please see the Official Solution in this thread:

If that doesn't help, then start a new thread.