I have an issue with LR using almost all GPU memory, impacting Photoshop performance. Once I switch to LR Developer module, VRAM usage goes through the roof and the PS interface becomes sluggish. For instance, opening a new document in PS is slow - and the new empty document will shortly show a part of the photograph I've opened previously. Zooming is slow and opening a filter like NIK becomes extremely slow. During the slow performance PS is even briefly showing status 'Is not responding' in the process list.

LR and PS constantly up to data via Creative Cloud. Windows 10 up to date, use constantly latest NVIDIA Studio drivers and have no errors or messages in event logs. No other issues. Screenshot of VRAM usage: 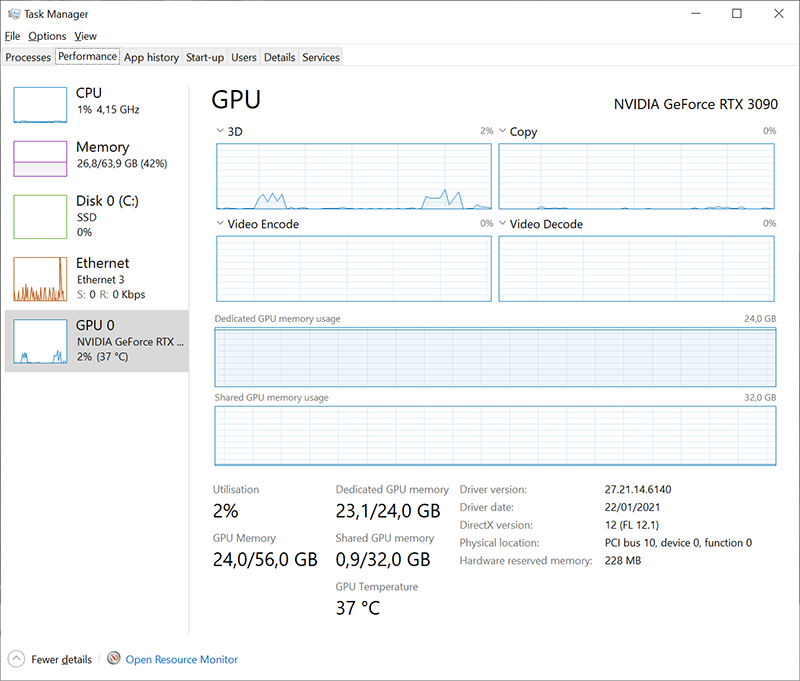 LR uses 22GB of the GPU memory. This amount seems rather unnecessary: LR performed about the same with my previous 8GB graphics card (of which LR used about 7GB, of course, and impacted PS performance the same way):

By closing LR, after some time of inactivity of LR or a sleep/wake cycle of the computer, VRAM is freed up and PS immediately uses more VRAM and all performance issues are gone:

Is there any possible solution - besides disabling GPU acceleration in LR or PS - to stop LR from hogging all the VRAM and impacting PS performance? I've checked the NVIDIA driver settings for relevant option, but there aren't any it seems.

Additional info: once minimized, LR will release the GPU memory after a while. However, when I maximize LR from the task bar again, my computer hangs for 10-20 sec at least. During that time VRAM will be filled to the brim again: 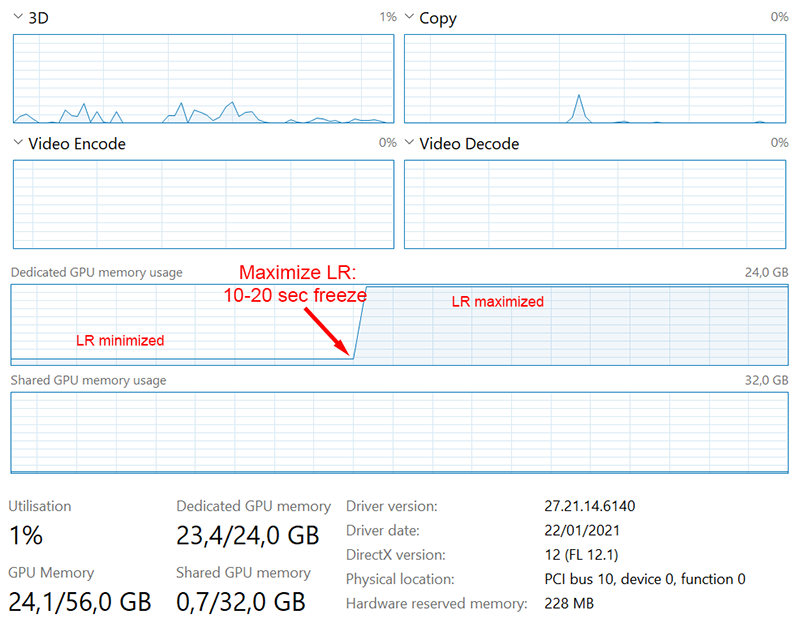 It is hard for me to understand that two sisters - LR and PS - constantly fight for room since the house is big enough. It seems sister LR always wants more and more and more. Some education from parent Adobe is required I'd say.

After about 30 minutes of using Lightroom Classic it seems that VRAM usage spikes to nearly all available and then the program goes absolutely chug in performance. When I first start it runs amazing, very snappy, but quickly this deteriorates to being unusable and I have to restart the program.

This thread is being merged into an existing authoritative thread for better tracking and response. Please review the official answer (if any) in the second post on the thread for more information.

The team has an issue logged around VRAM usage for an upcoming release.

I've been having this same issue with Lightroom classic, after a couple of minutes it saturates my VRAM like crazy. Based on the fact that your 24GB card is also having the same problem, it would seem that it will saturate the VRAM by almost 90% regardless of capacity. This definitely makes it seem like a bug.

this has FINALLY been fixed in today's release. Classic now releases VRAM when backgrounded. I'm also seeing a cache flush when going from Develop to the Grid.

Yay. I can finally have both Ps and Lr open while working!

OK that is good news. My only previous fix was to disable GPU usage in LR or repeatedly close it, both of which are not desirable.

The 10.3 release of LR indeed seems to have fixed the VRAM issue :) I deliberately tried to get the VRAM filled up again (many photo's, many Develop actions) but this time LR behaves it self: 50-60% VRAM usage tops, and it also releases VRAM (earlier the usage was only growing, usage never went down). Nice.

Using full GPU acceleration Lightroom Classic quickly fills up all 4gb of VRAM and when I open the image for further editing in Photoshop, the VRAM is not released by Lightroom, making PS GPU usage go to 100% and very laggy. Disabling the full GPU usage in Lightroom makes the issue go away, but then Lightroom is slower instead.
I know this is a known issue and supposedly fixed to some extent in the latest version of LR but apparently not for me.
I've uninstalled all CC-related stuff, did a clean graphics driver install, reinstalled PS and LR and the during the first two runs Lightroom actually released the VRAM and it worked as intended but then the issue came back and now it's all slouchy again, running these programs simultaneously.
Any tips, ideas or fixes are welcome.