Lightroom has long incorrectly copied crops and local adjustments between photos with different orientations. LR 10.2 tried unsuccessfully to fix that but broke copying between originals and virtual copies. This memo provides consistent principles of how copying should behave, test results of the current broken behavior, and a guide to implementing correct behavior.

Since this memo spans a number of bug reports about different symptoms, it shouldn't be merged with any one of them.

How Copying Crops and Adjustments Should Behave

Users almost always place crops and local adjustments relative to the photo's content. A Spot Removal is placed over a blemish on a face; an Adjustment Brush lightens the shadows under eyes; a crop is placed tightly around a face; a Graduated Filter darkens the sky.

So if a user copies a crop or local adjustment from a raw to a TIFF produced from that raw by Photoshop, the user expects the adjustment to appear in the exact same visual position and have the same effect. A Graduated Filter aligned with the horizon in the raw should also be aligned with the horizon in the TIFF; a Spot Removal applied to a face blemish in the raw should be located on that blemish in the TIFF.

Prior to LR 10.2, when crops and local adjustments were copied between photos with different orientations (e.g. a photo rotated in-camera and a TIFF created by editing that photo in Photoshop), the crops and adjustments appear at the wrong sizes and positions.

LR 10.2 tried to fix that. Crops now copy correctly between different orientations, but Graduated Filters and Adjustment Brushes only work when the target photo has had its metadata saved to disk, and Spot Removals and Radial Filters don't work at all.  And if the source or target photos have been cropped, copying local adjustments doesn't work.

Finally, when LR 10.2 copies Spot Removals from an original to a virtual copy, the source of the clone can shift in position significantly, even when the virtual copy is uncropped.

I've done extensive testing of copying crops and local adjustments with numerous combinations of orientation, cropping, and virtual copies, and only a few combinations work correctly (see the table below).

I used four versions of a JPEG photo that was originally landscape, with EXIF Orientation = Horizontal and internal LR orientation = "AB". Visually, all three appear as portrait in LR.

- "normal" is a version of the photo rotated clockwise in LR, edited in Photoshop, and saved as a JPEG. It has EXIF Orientation = Horizontal and internal LR orientation = "AB".

- "rotated" is a version of the photo rotated clockwise in LR. It's internal LR orientation is "BC".

- "rotated saved" is "rotated" with its metadata saved with Metadata > Save Metadata To File.

- "cropped VC" is a cropped virtual copy of the source or destination photo.

Each row of the table below represents the results of copying a Crop, Spot Removal (Clone), Graduated Filter, Radial Filter, and Adjustment Brush from the source photo to the destination photo. Y indicates correct copying, N incorrect copying.

For example, here are the test results for the first two rows, copying "normal" to "rotated" and "normal to "rotated saved": 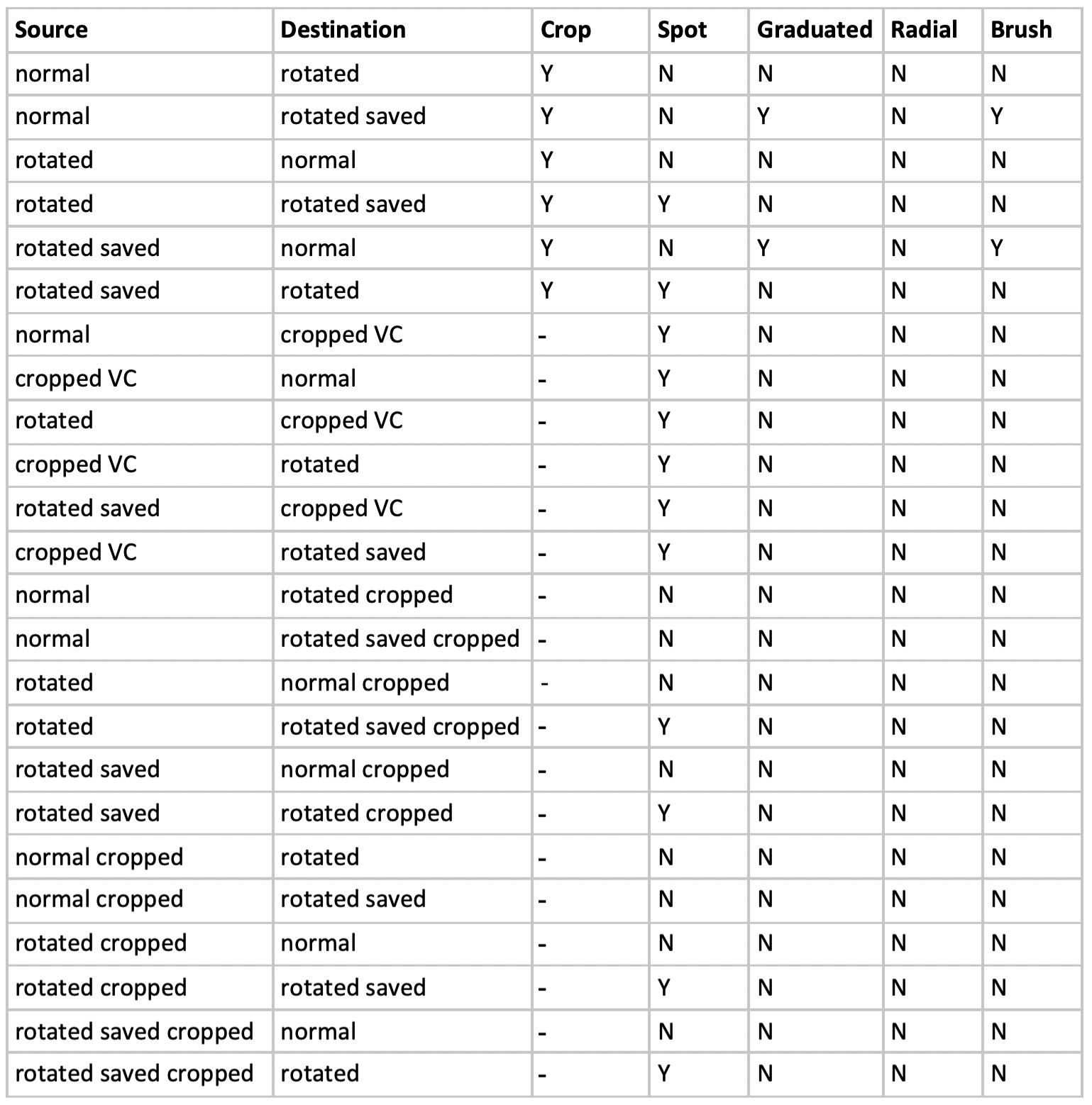 Implementing the desired behavior is straightforward, requiring elementary coordinate transformations from the source to destination photos. I've implemented these transformations for my Any Crop and Any Filter plugins, and I've posted a shorter description a couple years ago.

Prior to LR 10.2, when LR copied crops and local adjustments, it simply copied their underlying-pixel coordinates, which produces the wrong results when the source and target have different orientations.

LR 10.2 apparently tries to do something like this but gets it wrong in several ways:

- It doesn't transform the coordinates for Spot Removals or Radial Filters.

- It gets the target photo's orientation from its saved metadata rather than the current catalog setting.

Thanks for the detailed report - it shows a lot of work and thought on your part.

A few of the items in this list are active bugs scheduled for upcoming releases. It might be better to revisit this list after those are fixed to see what remainder we have that qualify for behavior change requests.

Also keep in mind that some recent behavior changes are being made in conjunction with yet-to-be-released features that can't be discussed yet.

aren't you all putting the cart before the horse? Why would you choose to break workflows months and months before a new feature is released? Countless professionals use Classic to get their jobs done and now they have a much harder time doing so because the software is no longer working as expected.
Is this going to be the new standard moving forward?

Of course it will be the new standard (and has been for some time). It's all about them moneyzzz.

The unzipped folder contains a _README.txt detailing how to run the suite and summarize the results in Excel.

The suite generalizes the results I presented above, testing combinations of rotation, cropping, and mirroring in the source and target photos, both unsaved and saved to metadata.

In the table below, the Source and Target representations are:

The adjustments tested are: 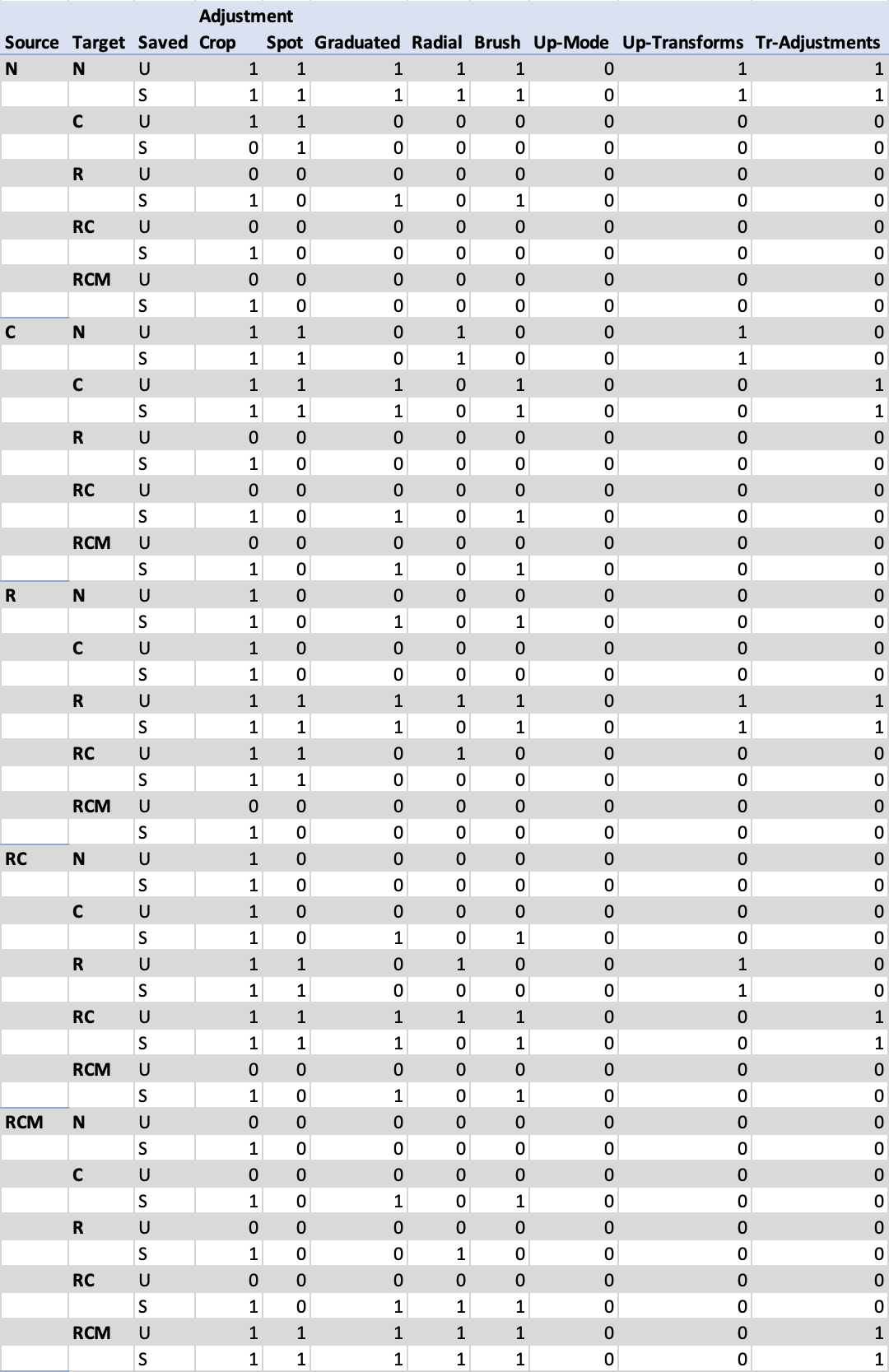 Great job John! Just as an FYI to everyone I first reported this issue in a post three years ago, which was merged to a newer post. So I can confirm this is at least a three year old problem, which remains uncorrected in LrC 10.3.

I released the Copy Settings plugin, which correctly copies local adjustments, spot removals, transforms, and crops between photos. It also lets you define presets for which settings should be copied.  I'm hoping that Adobe will fix all the bugs with Copy/Synchronize Settings soon, but meanwhile, this plugin will get the job done.

The code that translates Develop settings from one photo orientation to another is just over 400 lines, and I've made it available here:

And below are the test results for the plugin.  Like the built-in Copy/Synchronize Settings commands, the plugin can't correctly copy Transform > Upright Mode and Upright Transforms -- I wasn't able to figure out how to work around the bugs. The plugin can copy Transform Adjustments in many but not all cases: 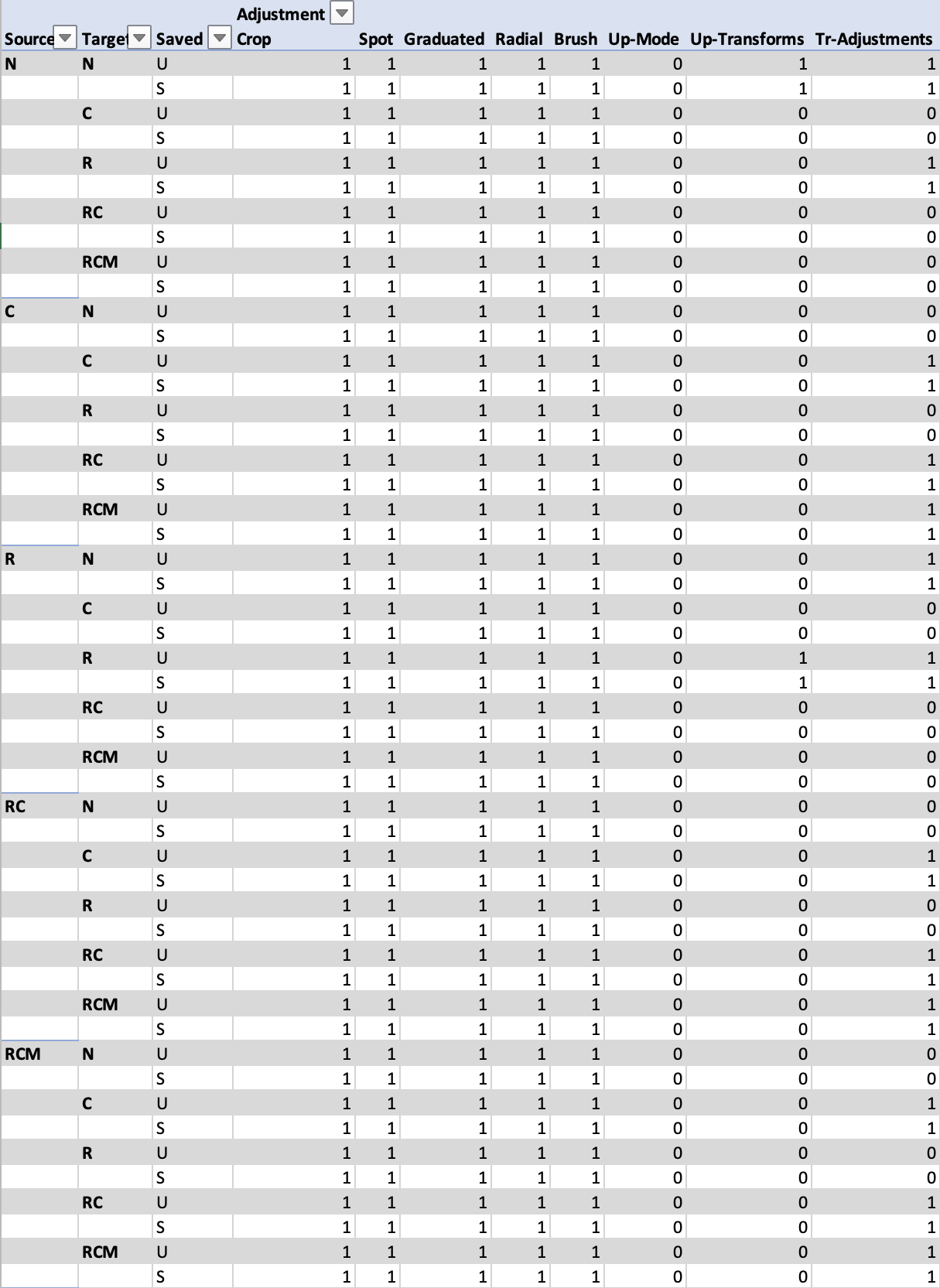 [s] this is clearly impossible, you couldn't have done it on your own if the whole LR team and QA haven't managed to prioritize and nail it for so long. Please do not make us believe in unimaginable !!! [/sarcasm]

Thank you and great work as always, have been a happy user of some of your plugins!

On my first synchronise I get this error:

An Internal Error Has Occurred:

I tried doing a synchronise first which brought up this error. I then tried copying and pasting settings which came up with the same error.

Am I doing something wrong?

Hi Colin, this is clearly a bug (probably an internal representation of a Develop setting from an older version of LR that I didn't catch).  Please send an email to my support address so I can can get some details and I'll fix it asap.  (My standard policy is to provide complimentary licenses to anyone who first reports a reproducible bug.) Thanks.

Dear Adobe, read and learn from the post above, this is how the business is done.

I have a friend that used to use the Upright Mode and Upright Transform Syncing, Copying etc but pretty much gave up on these bugs being fixed after all this time. It should be embarrassing to Adobe to leave this unfixed for so long considering the issues are totally repeatable and easily duplicated.

The fact that we can't sync or copy settings across differently cropped Virtual copies or snapshots is gravely damaging my workflow and it making me loose time and money.

This needs to be fixed.

Being unable to copy, sync local adjustments across differently cropped versions/virtual copies/snapshots of the same photo is gravely damaging my work.

I am loosing time, money.

@John_R_Ellis  I've been hammering on the team and we have a bug filed and are working on resolution.

I love John's plug in! It takes Lightroom syncing to the next level introducing PRESETS. Which is even more time saving.