When Lightroom displays a photo in Loupe view, it will shrink a large photo to fit the available screen real estate, but it will not enlarge a small photo to fit. To a first approximation, if the photo has fewer megapixels than the display, it will have a significant border between it and the Loupe area's edges: 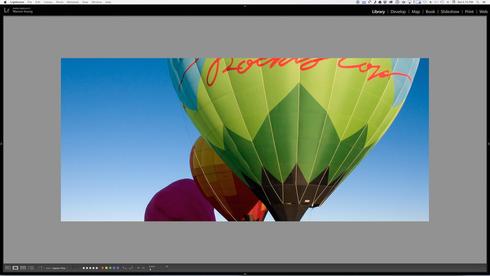 This design decision was fine in the pre-Retina/HiDPI days, when a typical computer display was only about 1-2 Mpix. Few digital cameras would put out photos smaller than that.

Then came Retina — or HiDPI as it is more generically known — but for the first few years, it was confined to smaller screens, for economic reasons. Up until recently, the largest Retina screen you could get for less than a few thousand dollars was a laptop display. A 13" Retina MacBook Pro is "only" 5 Mpix, so we're still okay when it comes to Lightroom's design space. It's a serious app for serious photographers, so we can feel okay about giving people with sub-5-Mpix photos short shrift in the Loupe area.

Last week, Apple shattered that state of affairs, with their new 5K Retina iMac. Now for what a 4-5K monitor used to cost, they're offering a complete computer, the sort that a Lightroom user can get a lot of mileage out of. 5120 ⨉ 2880 comes to 14 Mpix, which means photos from many serious cameras — nearly all mobile phone cameras, a great many older DSLRs, and even a lot of current P&S type cameras — do not put out photos large enough to fill the Loupe area at a 1:1 pixel ratio.

This affects other things, too, like the Full-Screen mode.

Other parts of Lightroom aren't affected: Develop mode, and Survey mode, for example. They will stretch a "small" photo to fill the available screen real estate.

I'm asking for Lightroom to extend that same behavior across all viewing modes. If there aren't enough pixels to fill the viewing area, stretch it. This 5K iMac is just the first domino to fall; just as with mobile phones in the past few years, we're going to see HiDPI take over the desktop computer world quickly.

We don't have enough info here to explain exactly what you're seeing, but Library and Develop do share the same view options. Watch the header in the Navigator panel to be sure of what zoom level you're at.

If a photo doesn't have enough pixels to fill the screen's resolution, we can't fix that, sorry. Our policy is to not scale up automatically (unless you tell us to by choosing a view option like 3:1), because scaling up will always introduce artifacts. We have to invent pixels that don't exist.

That is really strange logic. Guys below explained in detail why "fit" should enlarge also. Using new iMac 5K now, have this exact problem of smaller than screen resolution images not occupying all available screen real estate. Lightroom has had historic problems with using screen real estate to maximum. It always used to leave borders, etc. Now we have the true fullscreen mode at least, but still inadequate: you cannot use tools in it. There ought to be a fullscreen mode with tool panels appearing on mouse reaching the edge of screen, and they ought to be customizable.
Finally, please fix Lightroom for mac performance issues on hi dpi screens. Even Aperture that has been discontinued has less issued drawing on 5k screen than Lightroom.

Yes, I realize that scaling introduces problems, but 10-15" diagonal photos on a 27" monitor can be a problem, too. I realize that I'm asking for a choice between "a bit soft" and "small," but I want to be able to make that choice. Lightroom isn't even offering me the choice right now.

I think the "Fill" option in your Navigator panel screenshot should cause the photo to actually fill the entire available real estate, and "Fit" to fill either width or height without cropping. If someone wants to view a small photo at the photo's native pixel size, there's the 1:1 option already.

If this is a controversial opinion, make it a preference: allow stretching, or not.

If it seems ridiculous to be using Lightroom to work with 2-6 Mpix photos, allow me to remind you of some real-world facts:

4. Cell phone cameras, up until the last few years: 6 Mpix and under.

The restriction to 6 Mpix in the facts above is arbitrary. If we take that limit off, and look at the 10 Mpix photo sizes instead, which represent high-end cameras of their day, we're still not filling the 14 Mpix display area of this 5K 27" iMac.

Surely Adobe isn't thinking that the 3-5 year upgrade cycle of the computer and photo industries means we need to upgrade our photo archives every 3-5 years, too? Go out and try to re-take everything at 14+ Mpix?

Regarding the difference between Develop and Loupe view behaviors, I was imprecise. I meant that Develop would stretch the photo to fill the available real estate while in crop/rotate mode.

It is this Survey/Crop view behavior that I am asking for. I want that to be my default view on this 5K iMac.

The issue becomes much more annoying in case of slide shows. Even then you'll end up with a small image on a giant screen. When I first stumbled upon this I immediately thought there must be an option to remedy that - but there is none. The slide show preview panel pretends in that case that you get full screen presentation misleadingly.

Eventually I exported all the images to disk and used OS X Preview to view the images full screen. This is insane!

I absolutely agree that it makes sense not to scale during photo processing and evaluation. But presentation and slide shows are a completely different story...
I favor the "Fit" option should enlarge images in those cases. There is always "1:1" possible if wished otherwise.

In fullscreen and slideshow views, I would very much appreciate an option to scale the image up. It would help me get a better feel for the image. The imprecision of invented pixels is less distracting than large borders.

Aperture has the option (in fact it's the default) to scale up images in full screen mode. Images smaller than the "apparent" size of the monitor are scaled to fit that size. I have a 4K monitor set to an apparent size of 1920x1080, my 1600x1200 images are scaled to full screen (if I hit the Z key they are scaled 1:1).

I've been doing digital photography long enough that I have pictures ranging from 0.3 MP to 20 MP. I have over 10,000 2 MP images that actually look pretty good full screen in Aperture, and I'd like to have the option to view them at a reasonable size in Lightroom. I won't consider Lightroom to be a viable replacement for Aperture if this isn't possible.

Just upgrated form Lr3 to Lr6 and....guess what? What is shown perfectly fitted in Lr3 now is tiny small in Lr6! No way I can accept this, please fix the "fit" function asap.

Lightroom CC is a huge improvement in terms of performance especially on the iMac 5k! But this issue is still present. Even the 'Widescreen' option in the slide show module does still not display smaller images at full screen width.

@Adobe: Is this meanwhile accepted as a bug? Are there any plans to fix it?

Over the last weeks i have been looking at alternatives for Apple's Aperture. After having looked at a number of them I have concluded that I need an integrated photo management and editing tool, such as Capture One or Lightroom. Just now I have decided to go for Lightroom, although I find it clumsy compared to Aperture - but capable.  The fact that I could not view images full screen I decided was due to my lack of experience with Lightroom, but now I know Lightroom simply can't scale up fewer-pixel images to make full use of my retina display. When I browse through my large collection of scanned photos or simply older photos from earlier digital cameras I need to change the zoom level from picture to picture while browsing.

This is a deal breaker. Not being able to make full use of my retina display is an unacceptable and unnecessary limitation. It is incredable that Adobe does not see this as an issue, as the Adobe representative suggested a year ago (see above).

This reply was created from a merged topic originally titled Lightroom: When I click on the photo in Navigator some of my photo now do not fil....

When I click on the Photo in Navigator some of my photo now do not fill the full screen- these photos were exported in a few years ago and relate to the same memory card.