Beginning with at least the iPhone 4S, and continuing with the 5 and 5s, I see that videos shot with those devices show a capture time that seems to relate to GMT, when it was actually shot at GMT -5.

The videos show a correct creation time in Finder prior to import, but this odd shift occurs upon import. I know that the capture time can be edited in Lightroom, but I'd rather see the correct time on import.

This happens in Lightroom 5.3, but also occurred all the way back into 4.

This issue should be fixed in Lightroom CC2015.10/6.10.  Please update your system and let us know if you have any additional issues.

Additional information on this update can be found here: http://blogs.adobe.com/lightroomjournal/2017/04/lightroom-cc-2015-10-now-available.html

It's true that "[t]his issue should be fixed in Lightroom CC2015.10/6.10."  It's also true that it should have been fixed in many preceding releases.  Unfortunately, the reality is it is not fixed, and that this seems to be beyond Adobe's ability to fix.

Other videos taken recently and imported in the same manner show the correct capture date in LrD.  The only thing more maddening than a known bug that is ignored for years like this one, but which can be manually fixed, is a known bug that is reportedly fixed (twice!), and which sometimes seems to have actually been fixed, but not always!

I'd prefer to hear that I'm crazy, or that I've missed something obvious.  I'd prefer that to the alternative, which is that Adobe is still stepping all over it's d*ck trying to fix this. 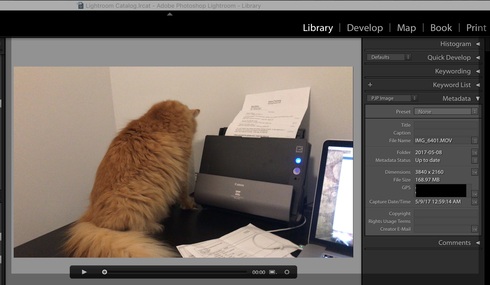 At the top of this page, you can see that the status was changed to In Progress. The bug is still open and additional fixes are pending.
Adobe Photography Products

I think you must have hit Submit prematurely, because surely you meant to add:

"...Adobe sincerely apologizes for issuing two separate releases in which we announced the bug was resolved, but in fact it was not. We know that the last release has made matters worse, not better. We also know that our paying users look to us to make their workflows easier, not harder. We are embarrassed by this clown-like series of errors, and we will soon post instructions by which our users, who we have been treating like unsuspecting beta users, may apply for refunds."

Note:
Thus, for such videos, Lightroom will only show Capture Time in GMT.

Lightroom CC2015.12/6.12 was released today and should address this issue.  Please update your Lightroom to the latest version and let us know if you continue to see the issue. Thank you for your patience.

Thanks, Rikk.  Hope it finally works.

My desktop app is not showing the latest update, nor does this page.  Is there another way to get it, or should I just wait and be patient?

It can take a few hours for the updates to propagate through the server. Your CC app refreshes every 24 hours. If you can't/won't wait, you can get it from the link John provided.
Adobe Photography Products

The update's not at the link John posted, either.

You need to click on the blue arrow to see the actual download links (see the screenshot): 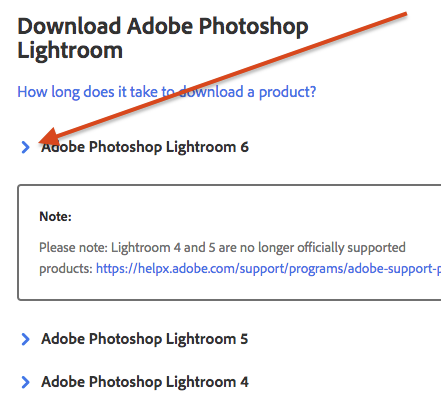 Details about the cause of this bug in LR:

The QuickTime spec "strongly recommends" that date/time values be stored as UTC (GMT):

The iPhone (iOS 7) does indeed store a video's Media Create Date as UTC.

When LR reads the Media Create Date of a QuickTime video, it correctly interprets that date/time as being in UTC. But the problem arises with LR's policy for handling date/times with time zones. When displaying a metadata date/time containing a time zone to the user, LR always hides the time zone. So the QuickTime date/time will appear to the user as shifted into UTC.

The fix is straightforward: When LR reads a QuickTime date/time, it should convert it into the time zone of the computer running LR. While this would produce incorrect results for the uncommon case of videos taken in one time zone but imported to a computer in another time zone, in the common case this fix would produce the desired result. And this would be better than the current situation, in which the displayed date/time is almost always wrong (except for the minority of users who take videos in GMT while not in daylight savings time). (And shame on Apple for defining a spec for date/times that doesn't allow for time zones.)

An example makes this clearer:

While we wait for a fix I have an imperfect workaround that works for me. I have a Sony a7Sii and I now set the "Area" (Timezone) to "London" and "Daylight saving" to "Off". This means that the time value never changes when Lr or the camera tries to calculate UTC time for Capture (Create) Time.

This is an inelegant solution because I now have to manually change the time when daylight savings comes on and off. But that is only twice a year.

Incidentally this also accounts for why some Sony users have this problem and others do not. If these values were never changed from UTC then the camera thinks it is in the UTC Timezone and they will never have this problem.

Moreover, the a7Sii does not have a GPS so it will never know what Timezone it is really in unless I tell it.

Thanks for that explanation, John. I'd love to see Adobe implement a fix.

Hi John, Great explanation.
However since PSE/PRE handles metadata and date codes properly, Adobe should be able to do it in LR. How much different could the import logic be? Of course, that is unless I am missing something here.

There's nothing fundamental that would prevent Adobe from fixing this problem in LR. In general, though, based on the past many years of experience, Adobe doesn't attach much priority to metadata issues, especially video metadata issues.

Adobe, why not offer a preference for those of us that want the import video time left alone, not shifted to GMT or UTC 0? I too am finding that when importing iPhone 6s videos to Lightroom CC 2015 I can see the correct time on the video in the Import window but after I submit the Import operation, the time shifts by 8 hrs (in my case I'm in PDT). Why would Adobe force us to accept this time shift without at least an option to disable it?

Note that LR isn't actually shifting the time of the video, it's failing to shift the the UTC time that the iPhone records to local time. (See the post above: http://feedback.photoshop.com/photosh....)

The original sin is Apple's, defining a spec (Quick Time) that doesn't allow time zones to be recorded. Given that, there are a couple of possible fixes for LR:

2. LR could have a preference or option in the Import window for how to handle Quick Time videos.

Given that video metadata is in general highly incomplete and buggy, and has been ever since video was added to LR 4, I think it's unlikely that Adobe will ever address this. :-<

Thanks John. I hope Adobe addes a preference setting in Lightroom to allow shifting the UTC stored time back to the computer's local timezone offset. Seems like a simple solution and if made a preference, users could opt in/out of this setting. However, I'd think all would opt for this option.

While using lightroom to import iPhone6 plus videos, the captured date/time are wrong and off by days sometimes(I have an example of a video who's meta data shows 12/27/2015 @ 4PM which is correct but lightroom shows 12/19/2015 @3:21:36 PM which is not correct) . Other times, the date is correct but the time is off by +8 hour for my videos taking in pacific standard time.

An update to my analysis above:

Many cameras don't have a notion of time zone, and these cameras record their current time (usually local time) in the QuickTime/MP4 Create Date field.  For these cameras, it would be a mistake for LR to interpret the Create Date as UTC.

But newer cameras and phones do have a notion of time zone, and some of these (e.g. the iPhone and the Sony RX10 II) follow the original spec and record UTC in Create Date.  They may also record a time zone in an undocumented, manufacturer-specific field.

So there's no straightforward, practical way LR can figure out whether the Create Date field is in UTC or local time.

I've encountered the same issue with my new Sony RX10 II - MP4 videos recorded with the XAVC S codec are shifted on import by 4 hours to match UTC. John R. Ellis has been a huge help in figuring out exactly what was happening and pointing me to this topic.

John is a HUGE wealth of knowledge and asset to the community.

Here is what bothers me, PSE seems to work while LR does not for creation dates of movies. If tat is true then why?

"PSE seems to work while LR does not for creation dates of movies. If tat is true then why?"

That's a good question.  I'll look into it.

The problem with using file date modified and file date created is that too many applications, utilities, and cloud services don't preserve them as the file is copied and moved.  Long-time Mac users have relied on the tradition of Mac apps preserving those dates, but these days there are many Mac apps and utilities that don't (including from Apple, and most especially including LR).

The whole point of photo and video metadata is to preserve important information inside the file in a documented way that all applications respect. But with respect to capture date, the industry has collectively screwed it up.

Thanks John. That makes sense to me.