When there are two keywords assigned to a photo that have the same name but different case, e.g. Activity > march and Months > March, the keywording panel fails to fully qualify the keywords,  showing "march, March" instead of "march < Activity, March < Months": 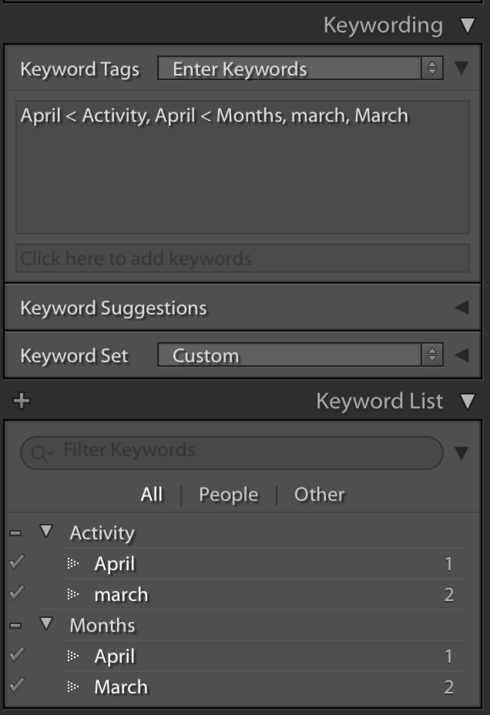 Further, if you type "March" in the keywording panel, you'll get an incorrect list of auto-complete suggestions "march" and "March", rather than "march < Activity" and "March < Months": 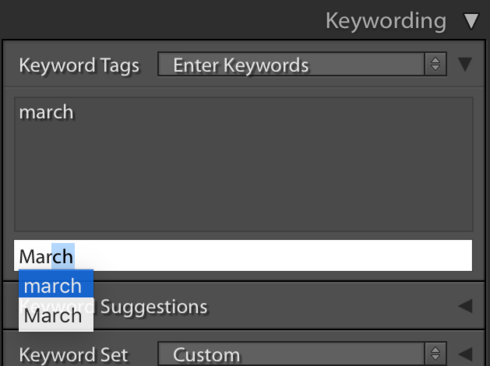 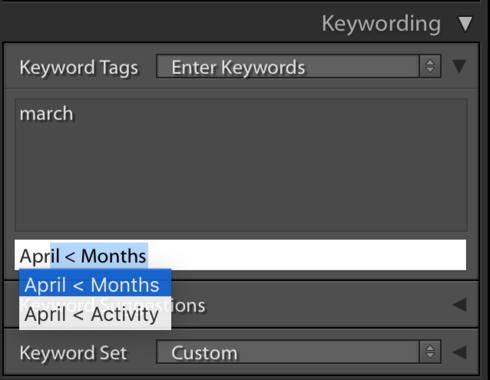 If you type "March" and hit enter, you'll incorrectly get "march < Acitivity".

If you type "March" and use the mouse to select the suggestion "March", you'll incorrectly get "march < Activity".

In general, LR aggressively ignores case of keywords everywhere except here.  Looks like a programmer forgot to do a case-insensitive comparison.

I have been able to reproduce the issue and I have logged the bug for the same.

If you have the same keyword at several levels of a heirarchy, the wrong one is added, even if you explicitly choose this in the add keywords dialogues or on import. I’m my example, I have “ activity < march, and therefore the wrong hierarchical keywords and synonyms. Lightroom seems to choose the first occurrence of a matching string in the heirarchy, even if you explicitly choose another. The only way to choose March is to filter and tick this particular keyword instead of the others.

Thanks for the reply. I am presently using Classic 8.2 with Windows 10 but have noticed the same behaviour in earlier versions.

The original post seems to have become garbled in transmission. To clarify, in an early hierarchy category I have a parent keyword “activity” with a child “march”. Then, later in my hierarchy categories, I have a section for dates, which includes “March”, the month. It is easy to see which is which as they complete as you type in “march” when applying keywords or selecting from the recently used list, not least because one is capitalised and the other is not, but also because you can see the activity parent for the unintended one, but nevertheless it does not select the correct one, despite expicitly selecting the capitalised keyword. As per the original post, the only way I can tag with March the month is to filter the keyword list then tick March. Because of the way my hierarchy happens to be organised, March the month is physically lower (and in a different category heading) than march the activity. Of course, the upshot is the wrong parent keywords and synonyms are included when Lightroom allocates the unintended keyword.

I am afraid I cannot send you a video at present. I am sitting in an airport lounge and even typing this on my iPad challenges my IT skills (which is probably why the original message seems to have become a bit garbled). If you cannot replicate this, I will send a video in a week or so when I am back home.

Note: This conversation was created from a reply on: Lightroom Classic: Wrong keyword selected.

Graham, Another way to enter the desired "march" is by fully qualifying the entered keyword. E.g. type "March < Months" in the Keywording panel.

“Another way to enter the desired "march" is by fully qualifying the entered keyword. E.g. type "March < Months" in the Keywording panel.”

By a quirk of my hierarchy, I cannot even do this. My non-exporting categories are such that march (activity) is at the second level of its category, but March (month) is at the top level of its category, so only the former shows as qualified. I see “march<activity” and “March”, so cannot select or type in just March alone without Lightroom selecting the wrong version, nor with a qualifier since the version I want does not have one.

Thanks for the suggestion though.


While not a bug as such, can you please request that consideration be given to another searching issue.


On several occasions I have not been able easily to find the location of a synonym I have wanted to change. I have had to resort to exporting my keyword list to Excel and searching there in order to locate it, then go back to Lightroom to open up the relevant keyword containing the synonym I want to edit. Lightroom itself should have this basic functionality built in without the need for such tedious work-arounds.