Lightroom: Metadata including dimensions and capture date for MP4 not read when THM sidecar present

When LR 7.3.1 imports a Sony or Canon MP4, if the THM sidecar is also present, then LR doesn't read the dimensions of the video and display them in the metadata panel. It also doesn't read the capture time properly -- instead, it uses the MP4's file modification time as the capture time, and it appears to set the multiple internal catalog fields inconsistently, causing inconsistent sorting by capture date in grid view.

This should be fixed in the next Lr update.

Note: This conversation was created from a reply on: Lightroom Classic: Sort by capture time bug. 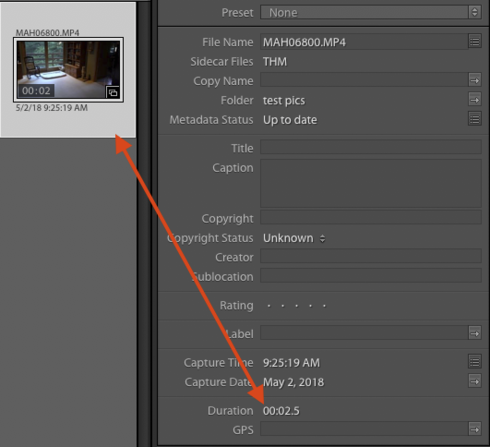 The problem appears related to the presence of the .thm sidecars created by the camera. If you copy the .mp4 files to your harddrive without the .thm sidecars and import from there, LR correctly reads the dimensions.

Using LR CC Classic 7.3.1.  When I import a mixture of still and video files into lightroom and attempt to sort by 'Capture Time' the .ARW (sony raw) and .mov (video) are separated, but within their file extension, they are sorted correctly by capture time.  If I edit capture time (Metadata>Edit Capture Time) and do not make any changes but select 'Change', then the file is placed in proper capture time sequence.  This behavior has been observed by others via a conversation on photo.net.

This is a difficult issue when one is shooting with two different cameras with different extensions and one wants to sort all of the captured pictures in sequence or when there is a mixture of stills and video from the same camera.

Here is a link.  Let me know if that works for you.  There are 7 files: two ARW, followed by MP4 and THM and then two more ARW files.  They are numbered sequentially as they were taken.  The last image is a screenshoot showing the sort order with the .mp4 at the end and you can see it was sorted by capture time.

Here is the link to the files
https://www.dropbox.com/sh/rntfzwqvgcgjmin/AAD14CrJyHSi-nhWuPcvGoy9a?dl=0

Let me know when you have got them so I can delete them to conserve space.

Note: This conversation was created from a reply on: Lightroom Classic: Sort by capture time bug.

Steven, my initial analysis of this bug was incorrect. Please see the first post in the merged thread above -- LR is getting confused by the presence of the THM sidecar files.

If you copy the videos to your hard drive first, delete the THMs, and then import them into LR, LR should set the capture time consistently.  Unfortunately, that capture time will be in UTC, not the local time. But you can use the Metadata > Edit Capture Time to shift all the videos by the appropriate number of hours.

This reply was created from a merged topic originally titled Canon7D Video THM Sidecar File Data Not Importing to Lightroom 7.3.1.

I've been using Lightroom to import Canon 7D video files for about 8 years with no major issues.  I just noticed that all videos I imported since mid-April have no meta data from the THM side car files - no date taken, no camera info, no exposure info, etc..  The previous import I did was in December 2017, and that sidecar information imported as usual.  I didn't import any videos between December and April, so I don't know with which release the issue started, but I suspect 7.3.

This screen shot shows a May 2018 import with no sidecar metadata: 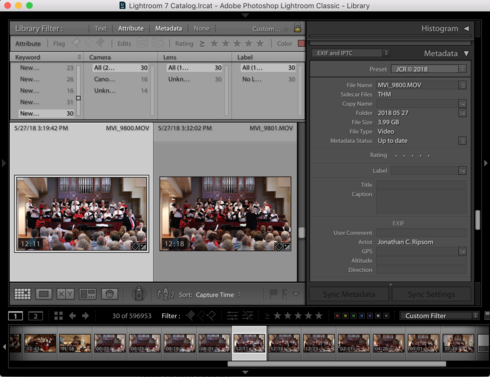 This screen shot shows a December 2017 import with all sidecar metadata: 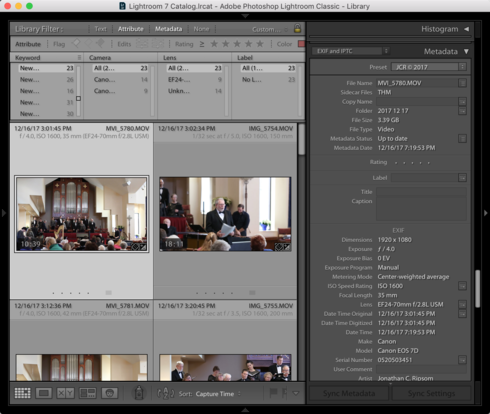 I did try an import with "Embedded or Sidecar Previews" just to make sure that wasn't the issue, but that setting made no difference in the metadata imported.

Any suggestions would be greatly appreciated!  Thanks!
Jon