After today's Lightroom update copy/paste settings from one image to another doesn't work correctly at my Lightroom. It just pastes some random settings, with always contrast minus 30 something. Color temperature - different as well. Some other settings such as curve copy fine. Checked copy preferences - all checkboxes are selected. Has anyone experienced same after updating?

Update: Using those shortcuts, I am able to reproduce what you are seeing Jon. I had only used the Menu commands before in my testing.  I've logged a bug. Till fixed, your menu commands are your best workaround. Thanks for sticking with it and recognizing what was happening.

You bet! Luckily it’s not a common action. I just have to try and avoid pasting profiles across a bunch of images first.

I just found this happening to me yesterday. (also Fuji owner) Great to see the issue is almost resolved already. Thank you guys.

Technically it is not just a Fuji Issue. I was able to replicate on Canon files as well.
Adobe Photography Products

Hello. Any chance of fix for this issue?

I still have this same issue... When repeatedly copy-ing and pasting the same thing it might turn up ok, but it's not a fluent way of working..

Please go to Help>System Info ... and copy your Lightroom version number and place it in your reply.
Thank you.

Thank you for the info.

Is the image from which you are copying using an auto-White Balance or Auto (exposure and color)?

If you mean auto setting in Lightroom, then no, I don't use it. Here are pictures attached, where is 1 - picture I copy settings from, 2 - picture I copy settings to (all default), 3 - result. What you are right about, and that's what I've just noticed, that it indeed looks like Auto setting switched on. If I try to apply Auto setting on this particular photo it gives quite the same result. But the fact is I never used auto setting neither I didn't apply it on any photo intentionally. 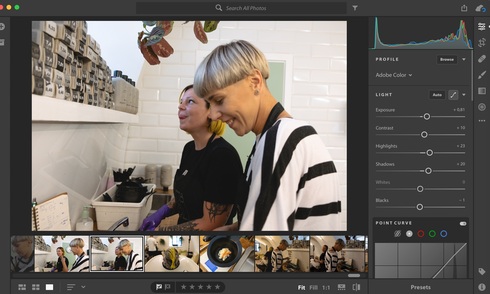 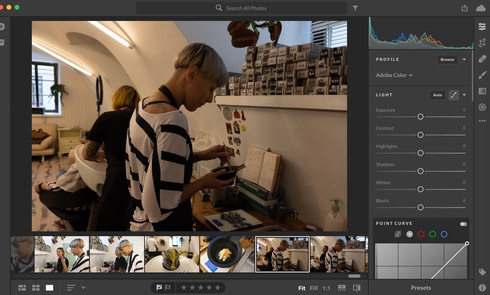 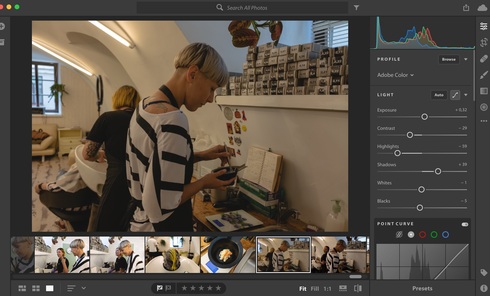 No it doesn't happen all the time. I didn't figure out when does it exactly happen, but it looks like this: I adjust first photo, copy its settings to a second one - it's ok, then once again to the next one - whoops, settings are wrong. When I'm trying to work with next photo form the default settings again and copy it to the next one sometimes it copies fine, but sometimes no. I didn't realise why could it happen at all. Maybe some particular setting which I adjust causes it, but for me it just seems random.
For group images same problem exists.

Mikhail, are you still having difficulties with the group pasted settings?
Adobe Photography Products

Problem still exists with single photos, I was doing some editing yesterday and it was still like this. Haven't tried group photos yet, but seems like as the app wasn't updated since then, I guess the problem still exists with group settings as well. Found a temporary cure though. If you found, that pasted settings are wrong, you have to go back to that photo you copied it from and then press Auto button in light section to switch it on, and switch off back (the button works laggy though, you have to wait some seconds till the button becomes available). After these steps if you copy settings again, they will past correctly. But this is very annoying in fact. It takes so much time to get the job done now.

Mikhail,Lightroom CC 1.5 was released today. I recommend you do an uninstall of your current version. Restart your computer and install the latest update. Let me know if you are still seeing the issue.

Simple update didn't help. As for uninstall (if I do it through Adobe Creative Cloud), will my database be saved after reinstall? Also, when uninstalling should I keep app preferences or no?

I wouldn't have expected a simple update to cure the issue. Reinstall is the next step. As long as you've synced all of your files to the cloud, you should be good. The database lives in the cloud first - your hard drive second. If no syncing is pending and you uninstall, reinstalling and signing in with your Adobe ID should restore your complete catalog - even if the catalog has been removed from the local hard drive.

I am having the same issue in Lightroom CC for Mac. To get a clean test, I choose two images that I just imported and made only one adjustment to them ahead of time: I set the color profile to Velvia.Here is the source image info and adjustments that I copied settings from:

And here is the target info and adjustments (after pasting):

I am using Lightroom CC version: 1.5 [ 20180807-1548-54800d7 ] (Aug  8 2018)I have included both images in the "for AdobeDebug" folder in the root level of my albums. This problem does not appear in Lightroom for Mobile.I am trying uninstalling and reinstalling now. I will update when I've completed that and tried again.

Okay, I was able to replicate the issue after re-install. Here's what happened:1. I imported two *.RAF files.2. Before making any adjustments, I tried copying settings on one and then pasting them on the other, and nothing happened (as it should).3. Then I changed the profile on the first photo to Velvia. Then copied the settings from that file to the 2nd file. Now both had Velvia in the settings.4. Then, I went back to the first photo, copied the settings again, and went to the 2nd and pasted them. At that point a random set of adjustments was pasted onto the 2nd photo. Not quite the same as the one above, but similar:

I then went back and imported two fresh .RAF files. This time I simply copied the settings from the first to the second. Nothing happened. Then I repeated that (without making any adjustments to either image at any point). The second time I copied and pasted, again, a random, but somewhat similar set of adjustments was made:

All 6 images I've run this test on are in the "for AdobeDebug" folder.

I've tried to reproduce using your steps, Jon. I think I tested about a dozen times but couldn't get it to duplicate your results. The second (and third, and fourth) paste are always identical to the first. I noticed your profile changed in the second screenshot you sent. Did that change also on your second paste?

I'm not sure what you mean. The first three screenshots of the adjustments were all using the Velvia profile. In those instances, I first changed the source to Velvia, then copied that over first, without any strange adjustments being pasted. Only when I went back to the original and copied the settings again, then pasted them on the target image a second time did the settings go haywire. On the 4th screenshot of the adjustments above, I tried it without setting the profile to Velvia first, and again, on the second copy/paste, I got the same weird result with the adjustments.

I've been able to replicate the issue more than three times now. I'm not sure what the next test would be. I could replicate this again and then send you diagnostics directly afterward?

Here's a video of me replicating the issue:

Trying to find how to send you a debug / diagnostic report, but I can't remember and can't find the instructions anywhere.

excuse me - make that the fourth screen shot...

I am asking the engineers what information they need for diagnosis before I have you send anything. The Full Report is quite large and I only require that as a last resort.
Adobe Photography Products

Ah, got it. 2nd screenshot of the 2nd set of screenshots then :-P. Okay, sounds good. Let me know if you need anything else.

Well it has nothing to do with Velvia profile, I never used any of those and still have the same bug. None of the updating or reinstalling helps, though. Basically when you copy settings and Lightroom pastes something what you've called 'random settings' is not actually that random. It copies/pastes same settings except "light" section. There Lightroom applies "Auto" setting for some reason and it's clearly a bug. It happens not all the time, so that something triggers it. Maybe when you touch one setting or another it can trigger this bug. Cause sometimes settings copy just fine. But this bug is really annoying, pissing me off completely already.

Not for me. On my computer it does not turn on Auto and all the color and light settings are slightly different each time. And for me, it happens every time on the 2nd copy paste. It is very consistent and repeatable.

It does turn Auto, with only difference that "Auto" button looks like if it was off, not highlighted. But chose the photo where you have these "random" pasted settings. Then reset all the settings and try to press "Auto" button on it. It will make same "random" settings as you had.

As I said, mine does not behave that way. If I reset, then hit auto, it applies slightly different adjustments. They are all close, within 5 points of each other, but all not quite the same.

just checked mine - for me it's same as Auto. Even though it's not exactly same for you, I still believe it has something to do with Auto. What camera brand do you use though? Is it Fuji?

It does seem generally patterned similarly, so there seems to be some connection happening. Though it seems pretty lame if Auto applies basically the same adjustments to every image.

The photos I’ve been testing this on were all taken on a Fujifilm X-T2.

Jon, since you and Mikhail have honed in on Fuji as a possible piece of the puzzle, would you be willing to share two of your files that exhibit the problem?

Absolutely! Do you want two fresh files or two that I’ve already tested this on?

Jon,  I received your files and have tested with them for the last half hour. I have yet to duplicate what you are seeing. The subsequent pastes from image 1 to image 2 have resulted in identical edits every time
Adobe Photography Products

And yet it's still happening with 100% consistency. In fact, I just replicated the bug on a JPEG, so it's not just RAF files.

What would be the next troubleshooting steps? Do you want me to document another video showing you Lightroom repeating the behavior with a JPEG?

Interesting. Precisely which KBSC are you using for Copy:
for Paste:
Adobe Photography Products

Updates to the Lightroom CC Ecosystem and Lightroom Classic CC were released earlier today. Please update your software and let us know if you are still experiencing this issue.

Tried that many times since update was released and for me it seems to work right now. Thank you.

This is happening to me on the mobile app version. When I copy the settings over from a saved picture it only copies over the lighting and color curve but not all of the color edits. I do pay for the mobile subscription. Have been manually editing all color in all photos for a month now since I noticed this happening.