A few days ago I was facing the problem I could not edit multiple pictures capture time (see here Lightroom CC: Ability to change EXIF capture date/time). In this topic (thanks to Victoria) I found that In Grid view Lightroom behaves somewhat different then in Film strip view. Everything seems to look the same, but once it affects all selected photos and once only one photo even with multiple selected. Here the Grid view has more capabilities than the same in Film strip view.

Today I got another lesson. If I press Delete button on physical keyboard in Grid view, picture is being removed from an album. BUT if I do exact same thing in Film strip view I get those pictures permanently deleted and lost (trash functionality of course was not implemented yet). So this time the Film strip view is more powerful and has bigger consequences then Grid view, so it is exactly the opposite logic then in previous issue with editing capture time.

I am switching from Grid to Filmstrip only because I want to see big or smaller images and I definitely do not expect such a differences in app behaviour pressing exactly same buttons.

Please, don't you have some UI / UX expert nearby to bring some rules into app behaviour?

That doesn't sound right dwbmb. The Delete key should only remove from an album, regardless of view. Opt D on Mac is Delete from the everywhere. 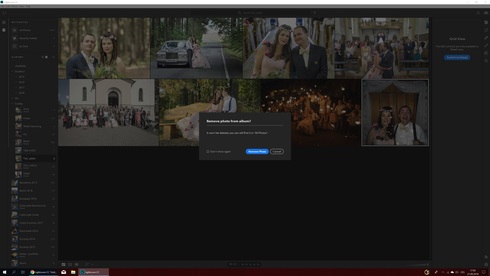 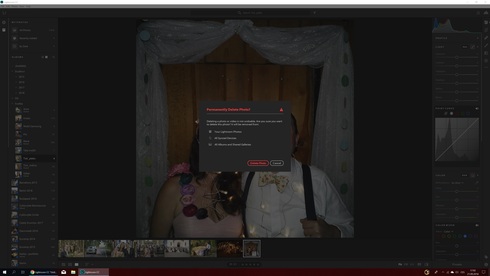 You were running into another keyboard oddity on another thread, and you had some Logitech software installed? Is it possible to deactivate this temporarily as I'm wondering if it's changing shortcuts.

It is usual office keyboard, not any gaming device with ability to create or modify shortcuts.  I don't think that such SW could possibly watch what is on screen and have some evil AI that would switch Delete button behaving depending on what is happening on screen anyway :DIt also behaves exactly the same on my work laptop without any 3rd party KB SW installed.

I've booted up a Windows VM to test and the backspace key is doing exactly what I'd expect - backspace just removes from album, alt-backspace deletes everywhere.

But I'm hearing that there is a difference between backspace and delete on Windows... does the backspace key (the intended shortcut) work as expected for you?

This might be the lead. Backspace always deletes only from an album, not completely. It is common on Windows to use Delete while Backspace generally just removes last written characters and sometimes is being used as a "go back" shortcut.

Funny fact - in Film strip view Alt+Backspace freezes the whole Lightroom and you have to switch to another app and back for Deletion prompt to appear. Lightroom must be running in fullscreen and it does not occur in grid view though.

I've created a bug in the interest of consistency on the KBSC.

One day you are gonna get statue for what you are doing :D Thank you.

I hope it is a statue of fierce animal...
Adobe Photography Products

Maybe after adjusting capture time with multiple selected pictures will be working in Loupe View too :D

And I found another one inconsistency. Copy/Paste settings affects all selected photos in Grid View but only one of many selected photos (roll a dice method?) in Loupe View (which I used to call film strip).I really do not want Lightroom to behave that differently only based on how big picture I want to see. And I also do not want to keep switching between views all the time because something works on this one and something else works on another one, not very helpful too. It is just another view, not another editing tool, editing should work the same there. I want Lightroom to behave consistently and predictably throughout the whole app, definitely not based on actual "zoom level".

That's following the normal rule - Grid view should affect all selected photos, Loupe view only affects the selected photo. The reason is simple - in Loupe view, you might not realize you have multiple photos selected.

I can not imagine a scenario in which I would like to copy and paste settings with a single picture. You always have to make a new selection for the paste action, so you probably are aware of what are you just selecting.

There's lots of scenarios where you might only want to paste to one photo, for example, you want to paste a crop from a raw file onto its Photoshop-edited version. And you don't always know what's selected, because you might have the filmstrip closed or you might not notice the selection line if they're all selected, and you might have hit the arrow key to move to the next photo instead of clicking on it in the Filmstrip. There's so many what-if's that they've stuck to the same precedent they've used in Lightroom 1-Classic for the last 12+ years.However, there is a little known keyboard shortcut that will paste to all of the selected photos in Detail view - the secret shortcut is Ctrl-Shift-V (Windows) / Cmd-Shift-V (Mac).

Updates to the Lightroom CC Ecosystem and Lightroom Classic CC were released earlier today. Please update your software and let us know if you are still experiencing this issue.

Hello Rikk and thanks for reminding this has been fixed. Just tried that out and deleting  works constantly now. About the other things mentioned above, I still have to keep switching between grind and filmstrip view though :(

Hello again Rikk. I am really happy Delete behaves constantly in albums now but it stopped working completely outside albums, in All Photos feed. See this topic https://feedback.photoshop.com/photoshop_family/topics/todays-update-of-lightroom-cc?topic-reply-lis...