Photoshop: Behavior of "Send to Back" and "Send to Front"

(Yet another issue I've wanted to comment on for years. Here goes . . .)

The Idea: Make Send to Back's and Send to Front's behavior consistent - why have them do something different for layer groups than they do for layers?

Layer Groups - image demo (Send to Back used in example, but same thing goes for Send to Front):

Layers - image demo (Send to Back used in example, but same thing goes for Send to Front): 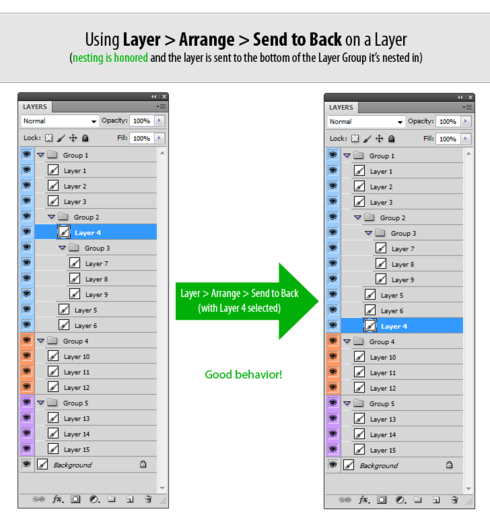 Why change the behavior now after all this time?

1) Consistency & Better Intuitive Predictability.
The two commands would be more consistent/predictable for new users. I believe anyone would expect it to work the way I'm suggesting. Personally, it's always thrown me off.

2) Increased Power to the User.
The power the commands give users would be increased - if implemented a user could very quickly in one keystroke (or menu selection) send the selected layer group to the bottom of the layer group it's currently nested in. With additional usage of Send to Back he can continue to send the layer group down in it's nested hierarchy until it's finally at the very bottom of the layer stack (just like he can do with a layer).

3) Less Precarious Clicking/Dragging.
How many here work on complex PSD with hundreds of layers. It can require a lot of manual clicking to relocate a certain layer group to a different location in the Layers Panel if the user can't see both the layer group AND where he wants it to be. This means he must drag it as far as he can, scroll, then drag some more until he's got it right.
-OR-
Click/drag and hold over upper or lower boundary of Layers Panel layer list and auto-scroll, but I've had bad luck trying this in the past. Seems buggy at times.
-OR-
"duplicate" layer group to a new doc, switch back to working doc, select layer/layer group which is below where he wants the layer group in question, then switch back to newly created doc, "duplicate" layer group back into working doc and erase other copy of the layer group before being duplicated.

Conclusion
As with almost everything in PS, yes there are numerous ways to skin the cat, and the driven graphics worker is usually not left out in the rain if really wanting to get something done -BUT- being able to more quickly relocate a layer group within the layer stack by using a nesting-honoring Send to Back and Send to Front command would really smooth things out when needing to reorganize a crazy mess of layers. A recurring need I have!

These two shortcuts would send a layer or layer group to the absolute top or absolute bottom of the entire layer stack, regardless of nesting, in ONE keystroke.

Not needed, but would be a nice increase of power for users.