Jeffrey, That is wonderful news ! Thank you !!

I downloaded the update, and I see Oil Filter under Filters/Stylize, but it is grayed out. Have tried with multiple different photos with no luck. What am I missing ? 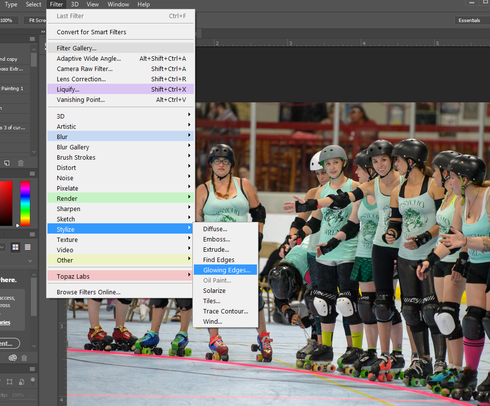 Note: This conversation was created from a reply on: Photoshop CC 2014: What happend to the Oil Paint filter?.

If Oil Paint is greyed out for you, try these steps:

2. Make sure your document is RGB. Oil Paint won't work on color spaces other than RGB (e.g. CMYK, Lab, etc)

3. If you're on Windows, make sure you're running a 64-bit OS with the 64-bit version of Photoshop. OpenCL requires 64-bit.

4. Make sure Use OpenCL is checked under Preferences > Performance > Advanced Settings.

5. Make sure your video card driver is up to date with the latest from the vendor website. Just doing Windows Update won't give you the latest and greatest drivers. You must go directly to your card manufacturers website to check for driver updates.

Oil Paint requires a card that supports OpenCL 1.1. Double check your card for compatibility and make sure your driver is up to date.

Thank you for your advice. I checked and my card supports Open CL. Downloaded an update. Oil paint was still gray, restarted computer and tried again, still gray.

I, too, can't use it... same grayed out menu entry... I have all settings on default, latest drivers, windows 10 updates etc. etc.

Oil Paint requires OpenCL 1.1 or greater and a 64-bit OS in order to run.

It may help if we could see your Photoshop System Info. Directions for sharing your system info from Photoshop:
http://feedback.photoshop.com/photosh...

Here is my SysInfo

Plug-ins that failed to load: NONE

This article says my card is supported?!?!

Not sure what to do here. Can someone at Adobe show this new filter actually working? A YouTube video would suffice

Your card doesn't appear to support OpenCL at all -- notice that the system info log has nothing about OpenCL from the card. My guess would be that something is missing from your driver, and required to enable OpenCL support.

Chris, sorry to rain on your parade but the card I have is a PROFESSIONAL WORKSTATION GRAPHICS CARD, Quadro 5000, specifically designed for this sort of work. It is even listed as a tested and approved card above in the link I provided. I also have the latest drivers from NVIDIA.

Which graphics cards are tested?

Adobe tested the following graphics processing cards (GPUs) before the release of Photoshop CC 2015. This document lists the cards by series. The minimum amount of graphics processor VRAM supported for Photoshop is 512 MB (1 GB or greater of VRAM is recommended).

Important: This document is updated as newly released cards are tested. However, Adobe cannot test all cards in a timely manner. If a card is not listed here and meets the minimum requirements, but was released after May 2013, you can assume it will work with Photoshop CC 2015.

I have in my system a card Nvidia FX 1700, working fine but not with Oil Paint filter, the card can work with OpenGL 2.1 so I don't think the problem is the card, but only a bug in Photoshop 2015.1

ok but may be you don't have to be rude with people here no???

Hi,
I have the same problem with the Greyed out oil paint filter. I have an acer laptop with intel core i7 chip, with intergrated graphic card intel HD 4400. I believe this card does have openCL 1.1 supported. Any help appreciated or if I'm unlucky and this is not a card supported by photoshop let me know.

I think I may have figured it out. Everyone should check their settings. I had OpenCL disabled by default in preferences! You must turn it on... HEre is the new system info but I still don't see anything about OpenCL... yet the filter now works

Plug-ins that failed to load: NONE 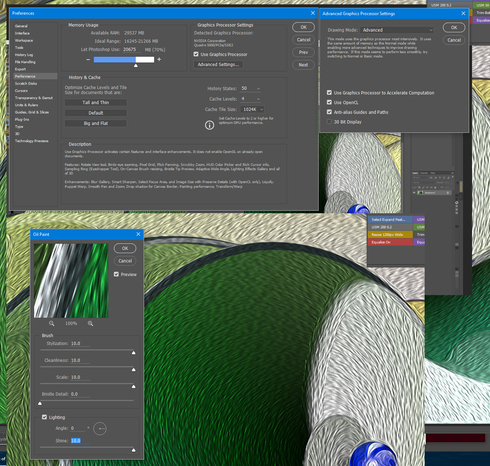 In the System Info it shows up as:

I thank you, too, Manny. Oil Paint worked fine right from the start, then suddenly greyed out--don't know why the preferences changed. Appreciate your help.
Jerre

I looked at the preferences file under performance but it wont allow me to click that option. I checked under photoshop cc2014 and cc2015 and both are greyed out without the option to put a tick in the box. I have checked my drivers and they say up to date.

My card is intergrated intel HD4400