I can't tell if this is a bug, or if I'm doing something really stupid, but as of last week, when I clip an adjustment layer to an image layer, the adjustment effect is simply disappearing. I am including example images which show a simple Hue/Saturation/Lightness adjustment using "colorize" over a painted layer, no blending modes used. In the second image you can see that the color simply disappears when the adjustment layer is clipped to the painted layer. This happens with other adjustment types too, like Brightness/Contrast. FWIW I just upgraded to Windows 8.1, and my the Adobe Application Manager says my Photoshop CC updates are current. 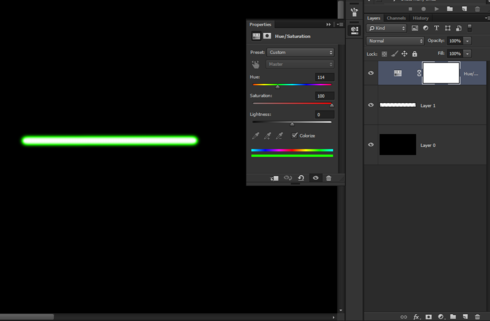 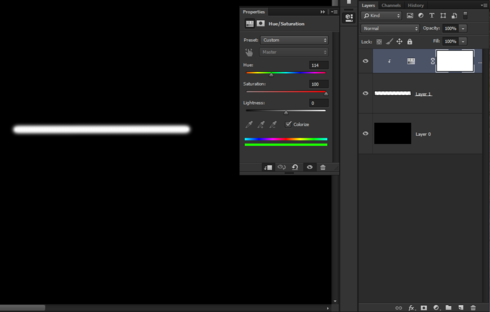 You seem not to understand what is going on.

The Layer is white.
The Adjustment has no effect on white.
The transparency is applied to the adjusted Layer.
Result: No discernible effect.

You must be right, but I could have sworn this problem was occurring with a variety of adjustments on more than one layer type (not just white on transparency). Thank you for explaining it again another way. I guess I was just being dense.

I was initially trying to follow this tutorial: http://www.photoshopessentials.com/ph... and wanted to apply the effect to multiple, overlapping layers without causing the hue/saturation effect to double, and hence wanted to clip the adjustment layers to the white layers, while preserving transparency. What I was trying to do was make flames come out of the mouth and eyes of a jack-o-lantern. The proximity of the mouth made its flames overlap the eyes, so I placed them on separate layers, with the jack-o-lantern image behind. I'd like to be able to use this on a variety of backgrounds, but the best I could come up with so far is to merge the finished flame layer with a black or white background and mask it off, which tints the edge in an ugly way.

Do you have any idea how I could create a similar effect while maintaining the transparency and separation between layers? I tried an inner glow layer style on this example image, but it just doesn't look as bright and realistic as a flame or laser effect, which is what I'm intending.

Thank you again for your patience and help!

Have you tried an Outer Glow or Drop Shadow with various Blend Mode settings?