Create 2 or more layers and draw something in each layer.
Link them all together.
Hide one (or more) of the layers.
Select the layers and duplicate them.
The duplicated layers will now have all layers visible.

This can be replicated with linked folders and the like.

You can hide ALL of the linked layers - duplicate will make them all display.

You can repeat the above with non-linked layers and everything works fine...

Which program are you using?
Which version?

Had a slightly earlier version, noticed the issue and patched up to:

Just thought that maybe I should clarify, the latest version has the same issue.

This reply was created from a merged topic originally titled Bug in duplicating folders.

Step by step to repeat bug:

This reply was created from a merged topic originally titled Photoshop" Duplicating a folder shows linked hidden layers inside of it.

Here's a screencast of it happening: http://screencast.com/t/Lcd7ukNvo1

Here is a photoshop file set up to replicate it: https://dl.dropboxusercontent.com/u/6...

So in short: duplicating a folder (using all methods I tried) will show any hidden layers that are inside of it that are *also* linked to other layers.

This reply was created from a merged topic originally titled Photoshop: Invisible linked layers turn ON when dragging layer set from one docum....

Sometimes when dragging a layer set from one document to another, invisible layers turn back on.

This is an issue I was experiencing intermittently for years now, and it always drives me crazy because it would only seem to happen when there was no time for dealing with it. Today I had some time to experiment and was able to reproduce the error.

Open or create a document. Create a layer set. Create two layers inside. Link them. Turn visibility of one off. 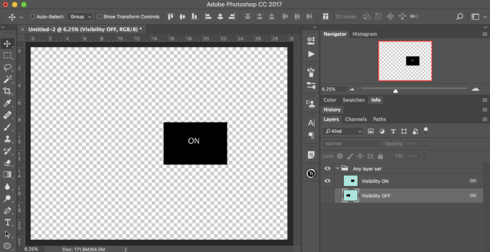 Create new or open another file. 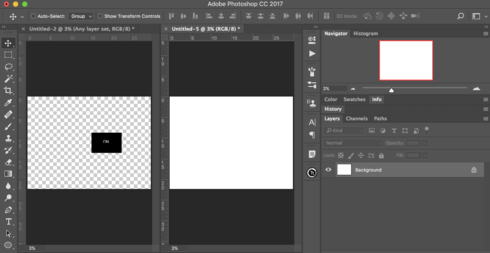 Drag your layer set from one to the other. 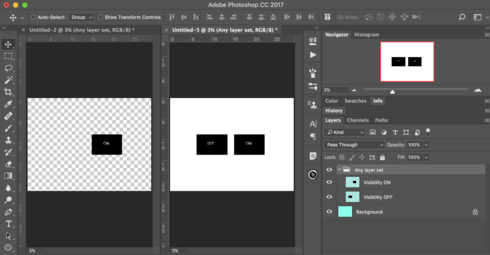 Notice how visibility of both layers is now ON? Easy enough to fix in this example, but imagine you are working on a complex image and trying to combine two different versions because the client has changed their mind (as clients often do) - not so easy to fix then.

A workaround seems to be if instead of dragging, you use "Duplicate Group" and set the target to another document, this issue does not occur. At least, I have not been able to reproduce this bug today while using that function.

Also, you might notice in my screenshots that I'm experiencing that bug where white displays as cyan in the layer thumbnails. That's been going on intermittently for ages too, but it is less of a problem.

Thanks for sharing the above examples to the posters in this thread. Appreciate the screenshots and videos explaining the issue. I know this is an old thread. Will check to see this if others on the team are aware of this issue.

Just wanted to chime in that I also encountered this bug, both in CC 2018 and CC 2019. It's really annoying, since I duplicate a lot of layers where I'm using a hidden linked layer. Each time, I have to hide that layer again after duplicating.

This bug cost my company a substantial cost and worse embarrassment. As a designer I often duplicate files I have worked on to save time creating similar files from scratch and I often hide layers I do not want to show up. Well I did that to a super large 4 foot foam core mounted poster for a movie premier. Guess what??? The hidden linked layer alternative spelling for the title showed up and we had to paste the small movie poster all over the large one. This bug is not cool!!!!! Thanks a lot adobe! Hopefully you can figure out how to keep linked layers that are hidden to stay hidden when duplicating a file. How many years has this bug been around? Sheesh

This is still persistent in PS 2020. I had never seen it until today.