Mouse issue with Photoshop. When trying to use the brush or any tool, the tool doesn't Hold + drag. Clicking and holding to use the brush only creates the initial mark (dot). Left clicking on tools with sub menus does nothing either. The only way to bring up a tools sub menu is to right click the tool, but I'm unable to do anything further. I have a wacom tablet (uninstalled and updated driver) and a wireless mouse (updated driver). I've also tried unplugging and using one mouse at a time. Updated my graphic driver for 8800 GTX. Re-installed adobe creative suite. Nothing seems to fix the issue. I opened paint to make sure it wasn't the mouse and I was able to draw with the brush in Paint. The problems only occur in photoshop. I'm at a loss of what to do. The attached image shows what happens when using the brush tool and clicking + holding + dragging. 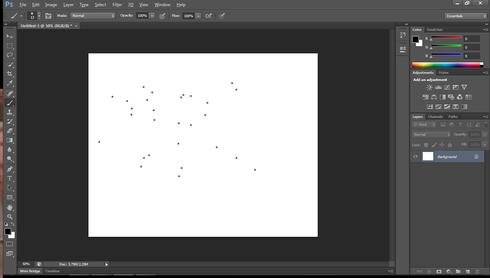 Is the issue limited to Brush or also evident with Clone Stamp or some other Tool?

Does turning off »Use Graphics Processor« in the Performance Preferences and restarting Photoshop have any bearing on the issue?
Have you tried trashing prefs yet?

The issue is with any tool. Nothing happens when I try to make selections with the marquees. The brush only makes dots. The sub menus don't pop out.

I turned off the "Use Graphics Processor" and I deleted the prefs. Sometimes it works for a while, but as soon as I close one document and open another the problem returns.

My guess would be a problem with one of your mouse or tablet drivers.

It does not help for me. Using Microsoft HID Drivers does not make any difference.

Its the same Problem reported two month ago: http://feedback.photoshop.com/photosh...

I dont want to copy/paste my post, but you can read it there.

Its still not fixed.

I was unable to fix it. I ended up restoring my PC to factory default. It's working now =/

I don't think it was the drivers. I uninstalled and re-installed them all. Mouse, tablet and graphics card drivers.

Restoring the PC to default reset the OS preferences and BIOS preferences, plus all the drivers (and possibly some malware along the way).

I'd bet it was a corrupt driver, possibly from a bad uninstall.

Its not a corrupt driver. I had a clean install of Windows 8 x64 Build 8400 and i gave me that bug with default HID Drivers, and after I installed Logitech Drivers the Problem was still there. Anyways, I restarted the program a few times and sometimes it works and sometimes not. I also got this Problem in a few more programs, such as:

whereas
Standard Microsoft programs like Office 365, Explorer,
every other used program including
Adobe Fireworks CS6 never had this bug.

I think it has something to do with the way these programs get their input, because how I said, the most of other software dont have this bug.

Anyways. If a dev wants to fix this issue, i uploaded a hardware report so you can perhaps gather some more information whats causing this issue.

You probably need to get that information to Microsoft so they can follow up on debugging it. Photoshop, Illustrator, and Chrome don't share much code. This has to be a driver or OS level problem.

I fixed it.
A service created by Synergy (http://synergy-foss.org) creates this bug. Deinstalling this software fixes the issue.

Im sorry that i thought adobe caused the problem, i hope this post helps other people fixing the issue.

I also had Synergy installed on Win 7 64bit. Uninstalled Synergy, restarted and it worked :-) I had the problem in both Photoshop and Illustrator. Both part of my newly bought Adobe Creative Suite 6 (Design & Web Premium).

By the way - After googling for photoshop cs6 + synergy, I found this bug-report: http://synergy-foss.org/spit/issues/d... Seems like Synergy is causing all sorts of problems. Too bad - I kinda like Synergy.

Odd... seems that I too have this problem, and fit into those who use Synergy... DAMMIT I NEED BOTH SOFTWARES :(

yehaa thank you, it's working without Synergy now :) thanks !!

I know this is old, but I am able to confirm the above issue. However, I fixed my issue differently. I can use both synergy and ps if they are both run with elevated credentials, (with admin privileges) or if they are both run normally.
It might be worth checking the permissions of the synergy.exe

I have the same situation when I have Chrome and Photoshop CS6 opened. My hand tool no longer works. I dont have Synergy installed. I believe this is a Chrome bug. Once I close Chrome, it works again. Would like to resolve this issue. Any advice?

Which version of chrome are you using, on which OS version? We'll see if we can reproduce it.

But you should also report this to Google/the Chrome team. In chrome, under the Help menu should be an entry for "report an issue".

Had about 40 different tabs open from Google to Tumblr to Reddit to Facebook. All the ones I thought most users would use. Couldn't reproduce the issue.

This reply was created from a merged topic originally titled
Photoshop CC: Mouse doesn't work correctly. I can't draw a line, resize mask or cropping field. Any dragging operation is not working..

Mouse doesn't work correctly. I can't draw a line, resize mask or cropping field. Any dragging operation is not working.

I have installed a trial version of Photoshop CC on Windows 8.1

Same exact problem happening on Photoshop Elements 11 for Mac. I've uninstalled everything that could use a mouse input (every extended desktop streamer, game app, everything) and the problem still persists and has ever since I've been using Photoshop for the past week.

thanks mrgreywater !! It was synergy. It is not necessery to uninstall the software, but closing it down is enough.

You don't need to uninstall Synergy, just stop the service using the "Services" MSC. This way you can start it again later and still have Synergy.

Starting both applications as admin (by default) works too

I'm using Photoshop CC 2015.5 (mac OS X v. 10.9.5) and am having a move tool issue. If I click and drag a layer item to move it to another place, it snaps right back to its original spot. I have to nudge it into position via the arrow keys. A similar problem occurs when I attempt to copy a layer by clicking and holding the "alt" key to drag out a copy. It seems as if photoshop is following the command, but once you release the key, the copy vanishes as if it never happened. Additionally, I can not reposition artboards simply by clicking and dragging to a new place and still have nudge them to the desired location with arrow keys.

All this nudging is extremely aggravating, highly time consuming and inefficient!  Are any of you having similar issues and is there a fix or at least a fix in progress available????

Why the heck was this issue moved to this thread?  It is not resolved or even close to it and it is not the same issue as the one discussed here. It may share a similar quality or two but is a completely separate issue .  I don't even know what Synergy is and this thread concerns issues in CS6 not CC 2015.5.  Please return it to a main thread where it is more relevant and has a chance of being seen by others who may have the same problem.

All cases where layers are snapping back to their original position when dragging have been the result of a system extension/conflict. If you run in Safe Mode does the problem go away? http://blogs.adobe.com/crawlspace/2012/07/photoshop-basic-troubleshooting-steps-to-fix-most-issues.h...

I have the same issue, since I've installed Photoshop 2017 and Dreamweaver 2017, my Photoshop 2015.5 stopped working correctly. Almost each time I click with Move, Marquee, Brush, Transform tool, etc -- cursor is jumping randomly to a distance out of the screen. If I try to click and drag, the cursor jump can happen somewhere in the middle of the action.  This happens only in Photoshop (only in canvas area, other interface elements are clicked correctly) and started only after installing 2017 products, so this is NOT driver problems.

I personally think this is some kind of conflict between different msvcrt*.dll versions used in different versions of Adobe products (and maybe other brands)

I also have Wacom Graphire2 which still works smoothly, so I have to switch to it each time I neeed to do some clicks on canvas...

Seems that cycling through the screen modes (`F` key in PS) really helps for a minute... but the problem returns.

After 6 months of having this bug and different experiments I'm sure that the problem is caused by different versions of MSVC libraries (MS Visual C++ runtime) or Microsoft.NET Framework (currently I have v4.0.30319).

Several time I've installed a program that installed some correct version of MSVC, the problem was fixed! I had to disable Acrobat Update, as it seemed to automatically ruin good working state.

this drag feature works on the MacBookair 2010 but every drag jumps back to the starting spot while using the macmini 2012. i thought a setting would cure this but no avail. Hello Dell?

As noted by customers on this thread, it's always a case of some other application or extension conflicting with Photoshop: https://helpx.adobe.com/photoshop/kb/keyboard-shortcuts-stop-photoshop-mac.html

A service created by Synergy (http://synergy-foss.org) also causes this bug