When importing a PDF with images, Photoshop CS6 adds faint outlines to the PDF image segments in the file. Prior versions of Photoshop render the PDF correctly. See the attached image for an example. 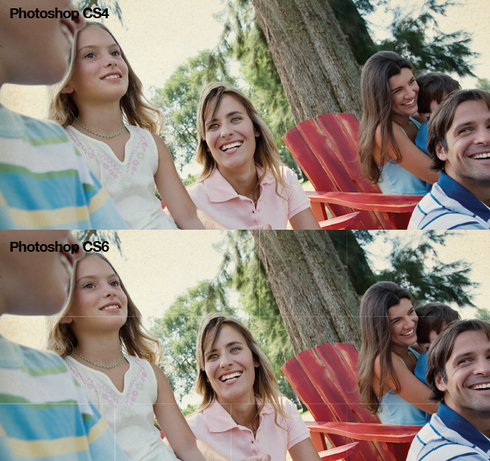 a switch back to the old render engine is no option?
at least until the error has been fixed?

Again, the error is in the software that created the PDF files, not in Photoshop.
And switching back to the old render settings means worse quality antialiasing, and just moves the artifacts around, but can't eliminate them.

if I have understood correctly, the error in the PDF engine, has been around for many years. there must be millions of faulty PDFs. probably even billions.
the old photoshop render engine can generate useable results from these PDFs. the new one not.

may be the newer render engine is better than the old one. but with many PDFs it is simply useless .

for us, the only workaround is to use an old photoshop version. :-(

It's the PDF output side of things that chops images into tiles, but in a way that they cannot be rasterized at other resolutions without artifacts. The rasterization just changed in a way that made the artifacts show up differently. Even older Photoshop versions will show the same artifacts, just at slightly different points. (once you know what to look for, it's easy to reproduce with all versions of Photoshop that rasterize PDF)

Chris, has any thought been given to the fact that while they cannot supposedly be rasterized at any resolution without the artefacts appearing, these atomic regions, I hope I'm right in thinking, *never* appear in printed files. So why is it possible for a PDF that is tiled in this way to be printed perfectly, but it is impossible to be rasterized perfectly? Can you see how that doesn't add up? Perhaps the rasterizing team should have a talk to the printing team, see if they can point them in the right direction?

They do appear in some printed files - but it depends on the resolution of the print. Since the PDF file is designed for print output, the image is usually near print resolution, and it prints at or above the image resolution and that minimizes the artifacts. However, some of our print paths also have hacks to detect this sort of tiling and try to fix it up. But I can't convince the rasterization folks to even talk about that yet.

Since months this case is a constant source of trouble for my work as a grafic designer. Meanwhile I can confirm that the main problem is on the side of pdf-generating (for example: InDesign-generated 60 square meters of digital print ended up in the trash). So, Chris, I have two questions.:

2. If this problem, which is in the way PDF files are written, is a given thing (as it looks like after there is no change after months): Wouldn’t it be great to have a photoshop-rendering engine, which can handle this problem? This is, what a good software should do: give reasonable results under difficult conditions.

Hi to all thread participants,

I didn't post anything in here for quite a while now - but I didn't stop following the (few) comments. Maybe this is the reason, that Adobe seems to do not very much to find a solution.
Chris - if your word (an the word of your colleagues in the photoshop division) isn't enough to instigate something: maybe a little petition can help to kick your chiefs butt.
Right now I only see lots of unsattisfied customers with a big, BIG problem. You can't just only earn money with your software, you have to do something in return for the (in my case regularly) paying folk (in addition to all the new - for me partly useless - functions).
If we (who use your software to make a living) would treat our customers this way - we probably would starve to death.
If you could give us updates (in case you work on this problem, at all) on a regular basis - this would at least show, that Adobe cares about its customers.

This reply was created from a merged topic originally titled
Wrong PDF rasterize in CC. 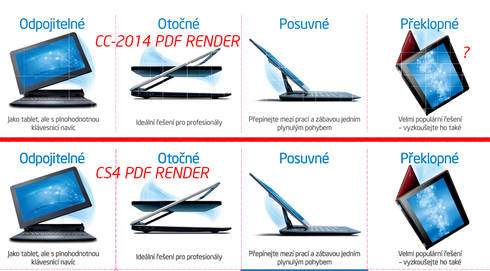 finally the topic died a painfull death.
I don't like monopolies at all - did I mention this already?
I can't find the words to express my feelings anymore.
It's a shame for you, Adobe. A shame!!!!!!!!!

This reply was created from a merged topic originally titled cut image imported from PDF to PS CS6.

cut image imported from PDF to PS CS6:
http://feedback.photoshop.com/photosh...
when this will be fixed ?

This reply was created from a merged topic originally titled Photoshop PDF rasterization continues to introduce unsightly trace lines around i....

Photoshop CS6 introduced issues with the rasterization of PDFs. Trace lines show up all over our images. They are not there when viewing the pdf in Reader. Some suggestions on the net have been to make sure you are rasterizing to the original resolution, but this still doesn't actually help.

I installed CC today to see if it has been fixed in the newer version of Photoshop, but still no progress. I have attached images that show the issue. Compare the pdf in acrobat reader to the one in Photoshop. I have zoomed them up to make the problem more obvious.

Is there a work around or a way to report the bug to Adobe? The bug reporter sent me here for Photoshop.

Also it would be nice if the pdf open dialog was automatable, but it is still very clunky.

Anyway, no reason I can convince the bosses to upgrade yet Adobe. I hoped that Acrobat Pro would offer one with the search and replace feature, but all it did was crash over and over. So far very unimpressed with the progress Adobe has made in 3 years. 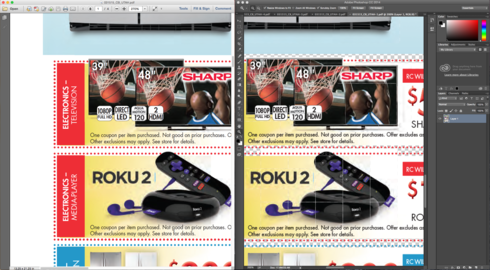 Perhaps not the most efficient anti-aliasing method, but it does the job without artefacts.

That can still get artifacts at some sizes/resolutions.

Again, as already explained several times in this topic: the problem is in the way the PDF files are created, and because they have images in tiles, they cannot always be rasterized without artifacts.

Chris, and why did that work fine in Photoshop prior to CS6?!?

That was already addresses earlier in this topic.

Chris, thank you for the explanation, I must have overlooked it. From my experience in version prior to CS6 it worked always fine. But anyway.

The problem became now with CC2015 even worser as the old work-around to rastersize the PDF in 2400dpi and than downsampling it to 300dpi does not work anymore. The anti-aliasing has been changed once again.

Thanks to mediengestalter.info I found the solution: One has to generate PDF/X4, and those PDFs containing transparencies can be rendered to an image by photoshop without problems.
If you only have the PDF X3-file, one has to export it to TIFF/JPEG directly from Acrobat.

What I still do not understand is, when these fine white lines are inside the PDF/x3, why do I see it e.g. in Photoshop CS6 and later, but not when producing offset-prints from such a PDF file?

When I export a JPEG from Acrobat there are no white lines as well. Does that mean Acrobat and Photoshop are using different antialiasing engines?

Wouldnt it be clever to add a function to Photoshop to let the user decide which kind of antialiasing he wants to being used when rendering a PDF/x3 or earlier to an image?

And last but not least, why can I export a TIF file directly from Indesign CC2015? Or does that feature has been moved to somewhere else?

Sorry, I meant why CANT I export to TIF from Indesign...

Hello I have similar issue here, after creating layout in Illustrator CS6 I wanted to export it to the PSD file, but whenever i open .ai or .pdf file in Photoshop CS6 every image in it has some weird jagged edges.

I tested importing .ai to Photoshop - resulting in jagged edges on transparent images, no matter what type of image is it (tiff or psd)

That's really annoying. I Think that it is a bug in Photoshop or Illustrator.

After exporting .ai to TIFF transparent images are OK. 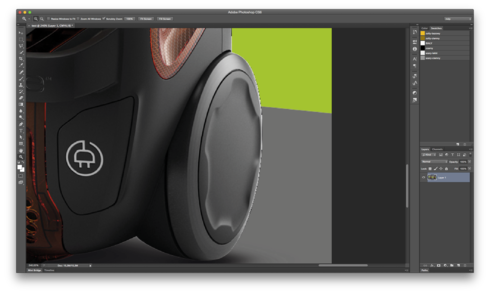 This is a great conversation that's not related to the one you just posted in, so I created a new conversation to continue the discussion.

I also recorded some tests:

Then drag them into photoshop.. VOILA!

This is counter intuitive... Try layering the imported image over itself 6 times (this value could be resolution dependent) at 100% opacity normal blend mode (or apply image 100% opacity normal blend mode 6 times), easy enough to do in an action/batch. I can’t explain why this fixes the issue as it should not fix the image, however it did in my tests (after 6 applications a difference blend test revealed no differences).

Hello, the problem is getting worse.
These fine white lines do not only appear when using transparency or shadows or something like that.
Just place several areas with the same color in InDesign next to another. No transparency used, just plain areas filled with any color.
Now export the document as PDF-X4 and import in Photoshop as smart object. Now you will see the lines between these areas. This is an absolutely no-go... 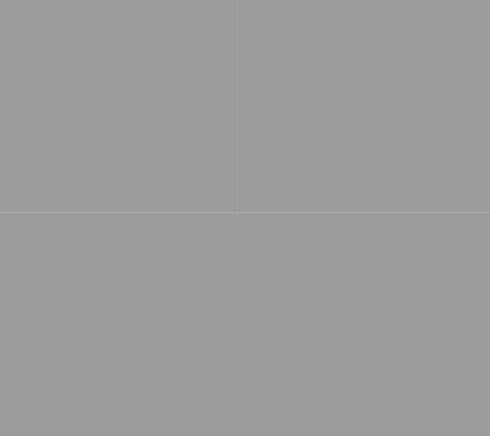 This still appears to be ongoing (CC 2018). We frequently get issues opening PDF's with random artefacts and hairlines appearing. In CS4 they are absolutely fine.

This is frustrating as we have upgraded our studio to CC but have to keep a copy of CS4 as the 'latest and greatest' version of Photoshop isn't as good.