Photoshop: Why can't I open pictures of paper currency?

For the record, the CS6 currency detection feature is a real headache for commercial designers and probably only the smallest of hurdles for serious counterfeiters. I work for a financial institution and I need to incorporate images of money and it's parts into my work, which is composed not only of print but of video and multimedia. I can't tell you what a headache it is that Photoshop is trying to reject these images that are so central to my work.

If I thought there was any chance that this feature might actually help prevent counterfeiting in any real way I'd be less inclined to complain, but I don't see how this can be effective. Anyone with the resources to imitate the specialty paper used in most currency will surely have no problem bending Photoshop to their will. Anyone who can't make or use the paper couldn't make a convincing bank note under any circumstances. Who, exactly, is being hindered by this feature? I'd argue it is commercial designers alone. Please rethink this nuisance nanny feature.

You might want to talk to the US Secret Service and the Central Bank Counterfeit Deterrence Group about the actual goals of the CDS systems (which are in many imaging software apps, plus scanners, printers, copiers, etc.).

why has only photoshop this problem and not all editing programs?

what you say makes no real sense.

»why has only photoshop this problem«
It’s a feature even if you call it a problem.
Edit: And well you may call it that but that does not mean Adobe’s decision to try to stay on the good side of law enforcement is unreasonable.

What sort of official response is that? " You might wanna talk to the US Secret Service " .. We might as well just talk to the president of the US about the issue, right? What's being pointed here is that; it's a ridiculous idea bereft of any serious thought. This could be properly thought in a way that doesn't hinder the creatives working on serious projects while also addressing the issue of someone meticulously working on the details to forge the currency. Just admit that Adobe wanted to get the monkey off their back and pushed a vacuous script onto the users.

This reply was created from a merged topic originally titled
Photoshop: Why can't I open pictures of paper currency?. 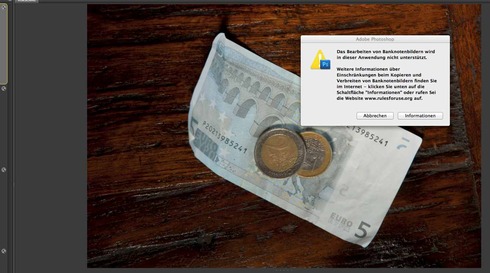 This reply was created from a merged topic originally titled
Photoshop CC: Problem with folded currency that was no problem for CS5.5.

I bought a stock image of some "trees" made out of $20 bills folded into triangles and created a brochure for my client using CS5.5. Since then I've updated to CC and now Photoshop refuses to open the file. The currency is folded up into narrow little triangles. Why was this not a problem for CS5.5 and completely impossible with CC? What is the workaround? 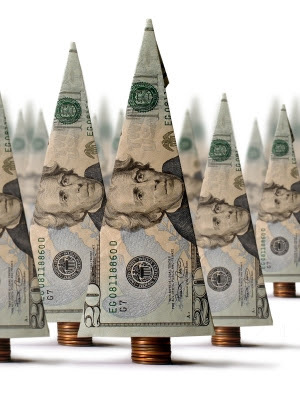 This reply was created from a merged topic originally titled Photoshop: Way too sensitive on images containing money..

I understand why you have a an issue with editing photos of money in photoshop, especially straight on shots bills. HOWEVER, a photo where a pile of money is used for an illustration should NEVER be blocked. In the image I am specifically talking about, there are no whole bills shown. The money is fanned out in a pile with things stacked on top of the money. If I cannot even show the edge of a piece of money, how am I supposed to do photo illustrations that require money in them? I will be using other editing software so that I can do my job. This is a problem that you should look into fixing, and making the blocking of money containing images way more specific than what it is currently. (I can't even get this photo into photoshop to add a watermark or resize it!) 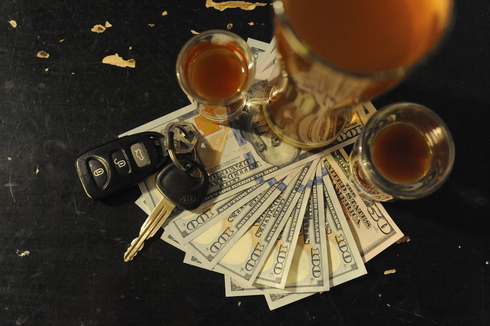 it ́s a idiotic thing from adobe.. yes adobe!

because other editing programs load the files just fine.

i do stockimages and guess what.... i often have money in my images.

now i can ́t even load images of banknotes that are partially covered. like with a banderole.

i can ́t use a great part of my stockimages with photoshop because photoshop refuses to load them.

other programs do it just fine. :-(

but there is a trick how you get such images into photoshop.
but im not telling in public because then it will be fixed by adobe.

i just say.. try a few other adobe apps in conjunction....

Um- yep this stinks.
So we went to the website to read the rules and we can use the image (that doesn't show a complete bill) if we write the word SPECIMEN on this-
guess what? If you can't open it in Photoshop- I'm not sure how to do that except to go buy a new photo editing software program.

Here are the stipulations:

For publicly accessible digital images, a banknote may be reproduced if both the following criteria are met:

My work around was to save it from a jpeg to a psd file.

What did you use to open it in order to be able to save over to PSD?

I don't know how; I don't know why; frankly, don't really care; but it worked!! I even created a layered smart object with it.

There are numerous ways to get around these nonsensical restrictions and
these are just some of the ways that I have tested:

I can scan using EpsonScan and save as a Tiff or a JPG;

I can open those scans in ACR, edit them and Save them as a JPG for web site or eMail use.

I can open the Scans in Illustrator and Save As a PDF which will open in Acrobat.

I can open the original scans and the saved files in Apple's Preview (and probably every other non-Adobe image-editing software in existence too!);

I can add files which were saved as PDF, Tif or JPG to eMails and post them on the Web;

I can create a Web Gallery and post it to my Web site through Bridge (and do the same thing in Lightroom too!).

The only program which will NOT open these images is Photoshop CC 2015 (or other recent versions of Ps).

Most of these methods will allow you to make prints as well but there some important things to know about doing that:

I find this situation with currency images and Photoshop to be totally laughable and utterly ridiculous!

I suggest that Adobe might want to re-consider this issue and remove this nonsensical restriction from Ps which is, almost certainly, serving only as an annoyance to their regular law-abiding Subscribers while it provides absolutely no deterrent to would-be Forgers at all?!!

This reply was created from a merged topic originally titled Opening banknote images - Give users an option to downsize!.

I have an idea that would alleviate some of the frustrations that graphic designers working in the banking/financial industries experience when trying to open images of currency at a high resolution. ("This application does not support the editing of banknote images.")

If you are unfamiliar with the problem, you can read this prior thread here:
http://feedback.photoshop.com/photosh...

My idea is simple. When you open a file that Adobe deems is in conflict with counterfeit law, there is a dialog box that asks the user whether or not you'd like to open the file at an "acceptable" resolution. If you select "Yes," then the file opens at the maximum legal file size to be in line with such regulations.

Even though I hate the counterfeit feature in general, this would alleviate some of the pain.

I came up with this idea because I had a huge stock image that I wanted to downsize for web use, but Photoshop wouldn't let me. This was ironic because the thing that I wanted to do would have actually resulted in a lo-res, "legal" image that would be readable by Photoshop. Your tech support people couldn't even tell me what an "acceptable" resolution would have been so that I could downsize it myself and be assured that it would work.

I spend good money every month to use Creative Suite, and it's a bit of a slap in the face to tell users to open the file in another non-Adobe image editor! Adobe needs to step up and give users some sort of open option, rather than just pulling the ripcord and redirecting folks to some third party regulatory website whenever it encounters a file like this.

I don't believe this should have been merged with the topic above. I am actually proposing a NEW IDEA here, not just piling on an old Question.

It isn't really a new idea, and is directly related to this topic.
Plus, it isn't a solution to the problem, but solutions are given in this topic.

This reply was created from a merged topic originally titled Photoshop prohibiting banknote use.

Hi, I work within the cash handling industry and frequently work with banknotes in our advertising. Is there a version of Photoshop that I can download that does not prohibit me from opening banknotes?

CS5 and earlier have worked for me in the past. Only the CC's seem compelled to block the use of even a little piece of a bill.

This reply was created from a merged topic originally titled Opening Images of Money.

I work for a company that sells money clips and our online shots include a quarter folded bill in the clip to show scale and use. However, we have recently run into the issue that Photoshop won't allow us to open the image. When we attempt to, we get a pop up message blocking us from opening the image. I found a work around for getting a file to open, but now my issue is that I can no longer open layered tiffs that we were working on previously, which have already been retouched but the layout might need changed. Does anyone have a suggestion for how to continue working with these layered files? Thanks!

It's probable a right decision that Adobe decided to follow the law, but the way the feature is implemented is wrong.

When such image is loaded by an automation script, Photoshop pops a modal message box which blocks the script, and it's no more an "automation", since the message has to be closed by hand.

Why not the Open() function simply return an error code, instead of showing the message box? Or, why there isn't an option to prevent from this blocking message?